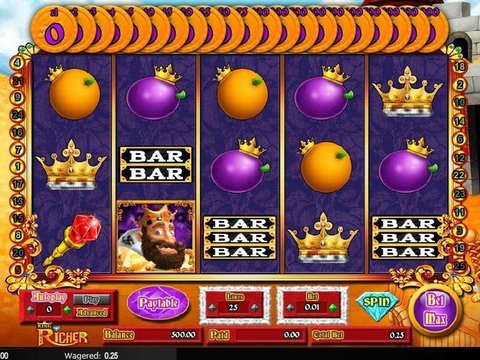 Despite the alluring and staggering luxurious life and endless riches of Kings, there's certainly a lot out there who's knowledgeable enough to the point that they'll certainly decline being a King just to avoid the innumerable responsibilities that will weigh on their shoulders. However, what if I tell you that you can simply swim in mountains of Gold without worrying even a tad bit about the responsibilities if you'll become the king in King Richer Slot Machine? There's no doubt that you'll take the bait and you'll be more than happy to do so as Amaya Software provides a lot to anticipate and exploit in this explosive game. If the king is not working, then just where does all the gold in this game come from? If you want to find out more, the no registration and no download King Richer free play slot demo is here for you to try out.

Life of Swimming on Mountains of Gold

Despite King Richer being oblivious and negligent to his kingdom duties, it is amazing that his castle have still acquired mountains of gold and the amazing thing is that even the storage of this wealth isn't properly observed by the king himself. You could see the castle at the right corner of the game which only means that the mountains of Gold indulged in King Richer Slot Machine is actually placed outside his abode rather than on a gaunt and robust treasure vault. In this pile of Gold, you just have to find out a few things and you can get rewards from the King himself. The game's structure contains 25 fixed pay lines to boot, with betting range up to 250 coins per spin. This means that both low-rollers and high-rollers will find this game enticing enough to risk their hard-earned money to find items for the king. In the pile of gold, you'll see classic symbols from Any Bar and Bar symbols, royal fruits with crowns from cherries, orange and grape, a staff with a ruby crystal, crown, lucky seven, the game's symbol and even the King himself. There's also the bonus symbol of the game which can provide entry to free games that comes with progressive jackpots to boot, while the +1 symbol increases number of free spin rounds. The King also hold the wild capability that provides a substitution prowess along with a multiplier of 2.

There are all kinds of king and King Richer Slot Machine is only one of them. Even the wilderness has its own king, a sample of which can be found in Savanna King Slot developed by Genesis. This game comes with an innovative 5-reel and 40-payline structure, featuring the great Savanna wilderness and the plenty of animals that thrive in it. It utilizes many symbols that will prove to be very lucrative but the jackpot of the game only ticks at about 800 coins.

King Richer Slot Machine may show the life of an oblivious king, but there's no reason for you to slack. In fact, this is an opportunity to accumulate massive advantages from a site such as Cresus casino to maximize your time in King Richer. You could revel on match-up promotions, free spins bonus and more on top of its superior availability in form of mobile and flash-play.