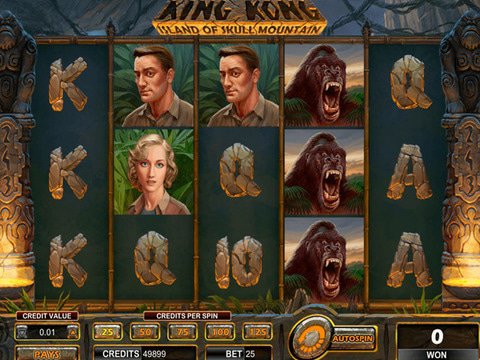 For decades, King Kong has experienced various spinoffs and versions with the 2005 film being one of the greatest. On 2017, another turning point presents itself for King Kong as yet another more advanced adaptation makes its way to the big screen while impressing its viewers to kingdom come. With its overflowing success, it is time for the 2017 version to also pave the way to yet another King kong slot and Amaya Software definitely didn't waste any time doing so. The software company presents its newly-developed game that proves to be as compelling as its title, the King Kong Island on Skull Mountain Slot Machine. It impresses in various aspects which you could find out more about through the review below. You could also play and give the no download King Kong Island on Skull Mountain free play slot demo in this page, giving you the privilege to experience the game with no risk involved.

The Monster of Skull Island

You know that something is extraordinarily great if it's adapted by the same software in various games and that's just what Amaya Software has done in King Kong. It definitely didn't cut any corners in the production of this innovative and visually compelling game and although the 2017 has been the one that paved its way to the reels, the game itself still harnessed the original version of the story which featured Ann Darcy and Jack Driscoll. The game is set on Skull Mountain wherein you'll see the highly-detailed trees, vines and tribal statues at night, illuminated by the fire that gives the game a more dramatic feel. The reels at the center is guarded by ancient tribal statues that makes the slot feel more time-tested as well. You could get whopping prizes by spotting various symbols on this 243-pay line game, providing abundant winning opportunities for you. You'll also see the captain of the ship, Ann Darcy and Jack Driscoll but of course, King Kong is still the one holding a staggering 2500 coin prize. However the jackpot more than that especially with the help of the Wild King Kong Symbol that provides a substitution capability and the Gate Symbol which can randomly give a symbol except the Wilds. Under the reels is a comprehensive control to manage bets and credits or engage in a series of Auto-spin to watch the reels go mad.

By now, there's truly plenty of King Kong slots in the industry but if you're looking for something with a bit more fun twist, then the Money Mad Monkey Slot Machine from Microgaming will surely be something you'd love. It comes with a cartoon-art with King Kong reveling on pools of cash rather than Ann Darcy. Its 5-reel and 20-payline gameplay may be simple, but its powerful rewarding nature is something you can't belittle. It utilizes outstanding symbols to aid users, but the most important part is its 100,000-coin jackpot up for grabs.

Before you visit King Kong Island on Skull Mountain Slot Machine, it is ideal that you know the most ideal site to do so. The Cresus Casino is what we suggest as it provides staggering match-up deposit, free spins bonus and even various programs. You can also play it mobile and instantly, making it truly convenient for players.