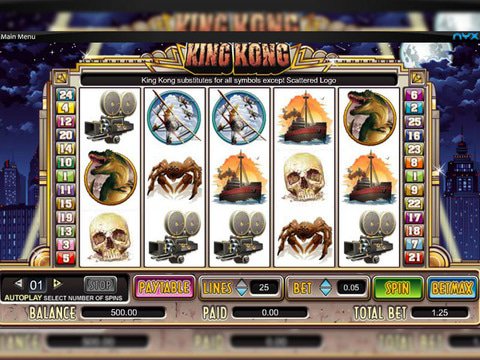 With the fame and power of King Kong that has hit the high bars decades ago, it is no surprise that this fame is already enough to help it pave its way to the gambling scene. With a plethora of films in its portfolio, there's also a lot of games that have adapted this game, one of which is a stellar creation from the renowned Amaya Software. The King Kong Slot Machine from this software is certainly worthy of the company's prestige that allowed it to maintain a high position in the industry which only means that there's big things to expect from this smashing monster turned into slots. You could learn more about this game that encompasses generations of greatness through the review below, or you could get more practical by experiencing it yourself. Have no worries as the no registration and no download King Kong free play slot demo is all you need to have a risk-free fun time of this game.

King Kong is in the City

In the wonderful and bustling city, you've heard that a Giant Gorilla has just been captured and the rest is certainly something you could imagine. The King Kong Slot Machine takes place in the City where King Kong was imprisoned and featured in shows. However those trifling constraints is not enough to stop King Kong and now, the lights are all over the place as this giant-smashing monster roams free in the city. At the center, you'll see the reels that will award you with whopping prizes as you spot things from shackles, patch of stars, skull, film recorder or the ship. There's also big prizes awaiting for you if you spot the giant crab, the tribesmen or even the all-powerful Tyrannosaurus. There's also Ann Darcy and Jack Driscoll along with the game's King Kong symbol and King Kong himself. Ann Darcy pays out a whopping 7500 coin prize, while King Kong is a special symbol that exhibits the power of a wild. If King Kong lands at the center reel, you could also trigger the special Ape Feature of the game that will undeniably bring you mountains of rewards to revel on. The King Kong Symbol is the scatter of the game, giving it the power to pay anywhere it lands, topped with the power to let you enter the unique King Kong Smash feature.

With the popularity of King Kong, it's no surprise that there's also others who have already made use of it such as Playtech. The King Kong Slot Machine of this renowned software capitalizes on the 2005 film itself, showcasing symbols that depicts real images of characters from the movie. This 5-reel and 20-payline game takes you to Skull Island itself while utilizing extremely special and lucrative symbols that will help you have fun and earn money throughout your experience.

If you want to dominate this all-powerful monster, you'll have to make use of every chance and advantages possible and the Cresus Casino definitely has a lot that you could make use of. It comes with a staggering 100% deposit match-up bonus up to $150 and 20 free spins as welcome package. There's VIP and Loyalty Programs in the long-run while on top of that, superior security and multi-software platform guarantees supreme moments.