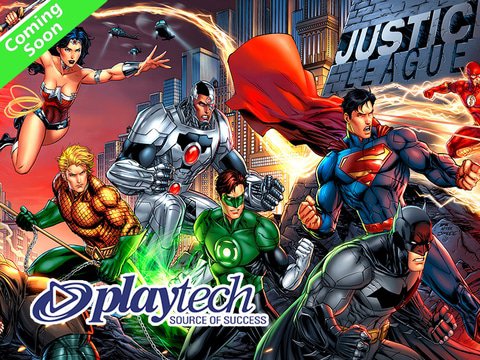 If a superhero has the ability to save a nation, then there is no doubt that a league of heroes can also do so. This is already proven by the DC's Justice League. This group can probably save a player's bank account too by playing the Justice League slot machine. Review the game using the free demo version on this page that requires no download.

Based on the famous comics, the story of Justice League has been so trending all over the world. Thus, Playtech software has brought the powerful heroes in the gaming world. Members of the league include the rich Batman, the gorgeous Wonder Woman, the fast Flash, the cool Aquaman, the cybernetic Cyborg, and of course the might Superman. All these superheroes can be seen in the reels of the game.

Justice League slot machine has 5 reels where players can bet on 40 pay lines. Symbols used in the game are the images of the powerful heroes who are ready to save rewards for the players. The amount of bet can be modified using the navigational buttons at the bottom of the screen. In addition, players may check the corresponding amount of each symbol using the paytable.

Players can win the game by matching similar icons on a single pay line, but the heroes won't let players leave without some additional rewards. Players may anticipate the exciting re-spin bonus feature. It allows one of the heroes to become wild icon that can be retriggered up to five times in a row.

Free spins are also given away depending on the hero of the player. Additional spins from these mighty creatures come with a chance to turn more symbols into wild icons implying higher cash prize. For example, Batman can yield 2 free spins while Superman can give 5. Meanwhile, Wonder Woman, Aquaman, Cyborg, and The Flash can give players 7, 10, 12, and 15 free spins respectively. These free spins can also trigger extra wilds that players will surely love.

Aside from these free spins and wild icons, Justice League slot machine players will also get a chance to bag the huge pot money of DC Super Heroes Progressive Jackpot system.

If playing with too many superheroes does not appeal to the players, maybe they should try one of the first superhero-themed game developed by Playtech. The Superman I slot machine is one of the best options for players who want to focus on a single hero. Graphics of the said version is quite outdated but it will still give players a fun time playing on the 50 pay lines.

Canadian players are recommended to try the Justice League free play slot in the Sports Interaction Casino. The gaming site is mobile ready so players will surely love the responsive interface of the game. No registration is asked when trying the demo version on Sports Interaction. In addition, free spins and bonus are also given away on this site.