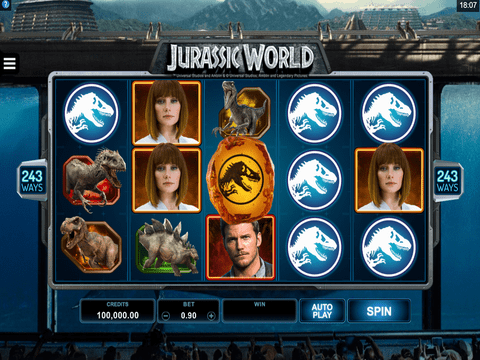 Following the success of Jurassic Park slot machine in the gaming industry, its developer plans to release another popular movie-based slot game which will truly entice its existing online and mobile players. Get thrilled and excited on the upcoming Jurassic World slot machine which was based on the blockbuster Hollywood film with the same title. You may now explore the 3D world of dinosaurs with exceptional visual effects and action-packed gaming graphics on this featured slot game from Microgaming software. Try this free play now with no download required on this site.

This five reel game has 30 unique paylines you can wager to. The payout amounts you get will depend on the total stake you placed per line. There are also free spin rewards from the scatters, as well as wild symbol bonuses, which are exclusive for its players.

Jurassic World also boasts its special Parallax Scrolling effects which is a first in the slot machines industry. This special feature brings you with realistic visual images and details on the screen, as well as the characters on the reels.

Just like any the other slot games available, you need to acquire winning combinations on the reels to get rewarded with striking payouts and cash prizes. These are combinations of theme-based symbols like dinosaur eggs and dinosaurs like the T-Rex, Argentinosaurus, Pterodactyl and many others. It also includes icons of volcanoes, amber fossils, and a dinosaur's eye. These reel symbols have different amounts of payouts depending on the combinations you get on the screen and the amount of stake you placed per line.

You have better chances on winning the maximum jackpot worth 1,900,000 credits if you win continuously in Jurassic World slot machine.

Aside from these huge payouts, this game also has several bonus features which may reward you with promising prizes and free games. To activate these free spin modes, you should look out for these five dinosaurs - the Velociraptor, Tyrannosaurus, Brachiosaurus, Dilophosaurus - which also acts as a winning wild, and the Triceratops - which is also the running wild of the game.

You may get a number of free spin bonuses ranging from 5, 10, or 30 times on appearances of these icons.

There is also a T-Rex alert game mode which is activated when the wild symbols - which is the dinosaur's eye - cover all five reels in a line. You are then rewarded with 12 bonus spins which are considered as stacked free spins.

If you are looking for a similar themed game which focuses on dinosaurs, you may want to check out BGO's Jurassic Island slot machine. Jurassic Island is a five reel slot game which has 25 active paylines for you. You may place stakes for as low as a quarter up to a $50 maximum wager - which may win you up to 1,000 credits. It also has expanding wilds which increase your chances of winning big on the reels.

You may now try Jurassic World's demo version in Jackpot City Casino with no registration required. Canadian players are also welcomed to play with real money wagers to earn exclusive no deposit and free spin bonuses from this site.