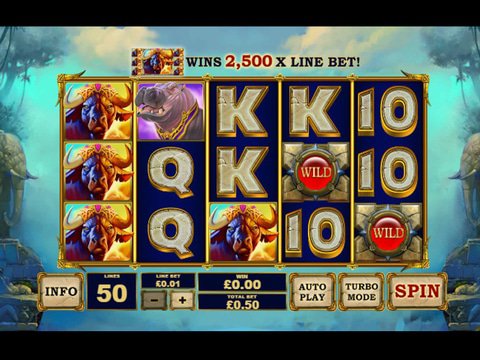 Brave the jungle and see how the wild animals can be friendly to the players in the Jungle Giants slot machine. To get a glimpse of the game, players may access the demo version on this page. It is available for free and it requires no download so players can immediately review the game as soon as they want.

This slot machine is developed by the well-known Playtech software. As the developer is popular for creating awesome games, players can expect a great experience with Jungle Giants. The game is set on an African jungle where players can meet wild animals. The design of the game elicits a realistic ambiance that will bring players inside a wilderness.

Jungle Giants slot machine has 3 x 5 reels that are waiting for players to spin. It will allow players to bet on the 50 pay lines available. Players may easily configure the size of their bet using the buttons at the bottom of the reels. Other than the usual playing card symbols like 10, J, Q, K, and A, this game also shows ox, hippopotamus, elephant, gorilla, and rhino. All these creatures can yield a whopping amount of cash. Better see the pay table of the game for the complete matrix of the value of each symbol on the game.

Treasures from the Jungle Giants

There are many other ways to increase the balance of a player in this jungle. First strategy is to hit the wild icon. Getting 5 wild icons can help the jungle players to win 1,000 times their stake. More than that, the wild icon has the power to substitute other icons on the reels to make a winning pattern. This symbol is the highest paying icon on the game.

The Jungle Giant logo has also a special role to play. It acts as the scatter icon that can trigger up to 8 free spins. At least three of game logos can already pay some free spins so players should keep an eye on it. Playing the Jungle Giants slot machine allows the players to take home up to 7,500x of their stake in a single spin. That is the highest possible game prize that players can get on one shot inside this jungle.

Other Jungle to Explore

Aside from the animals, there are also golden items inside the jungle as seen in the Golden Jungle slot machine. Instead of using animals as the symbols, this game features different gold items. This game is powered by IGT and let the players bet on the 50 pay lines available, similar with the number of pay lines that Jungle Giants game possesses.

Sports Interaction Casino can be the player's go-to site when they want to try the Jungle Giants free play slot. Canadian players will definitely enjoy this game that can be played with no registration needed. The said gaming site can also be opened using mobile gadgets such as Android phone, tablet, iPhone, or iPad.