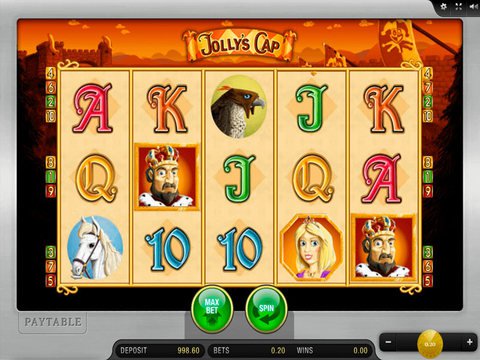 Right now, innovation had taken place in all corners of the world while the slot industry has also indulged on its many advantages. However, as slots became more complex, the palate of the users are now begging for the old days when there isn't any of the complex stories and complex features that are offered right now - just one recognizable and classic theme with a gameplay that's as straightforward as it can be. Merkur Gaming has risen to the occasion to provide an impressive game that will answer the desires of countless wagers - the Jolly's Cap Slot Machine. This medieval-based game comes with some of the most compelling features you'd ever think of, packed in simplicity that switched its gears from being ordinary in our generation to one that's what bettors have always been looking for. Canadian gambler or not, try the Jolly's Cap free play slot demo in this page with no registration and no download required to learn more about it.

You may think that not having all the bells and whistles may not be good for the Jolly's Cap Slot machine with the intense competition nowadays but, that's exactly where its main beauty comes from. The graphics of the game shows a compelling view of a castle in sundown, putting off a vibrant appeal that will mesmerize any user. Its crisp and vivid aesthetics are further hammered down to perfection when you look at its 5-reel and 10-payline gameplay, which holds the massive amount of symbols which are ready to bring you endless bouts with luck and magically gain stellar prizes if you manage to win. The game is as straightforward as it can - you don't have any complex controls - all you can change is its betting range and the paylines are already fixed. You can spin the reel or you can learn more about the symbols through its pay table. From there, you'll be introduced to regular card symbols you'll often see in slots, a falcon, white horse, princess, king, a jester, and a jester's cap. The highest-paying symbol of the game is the playful jester himself, capable of bringing you up to a staggering 4000-coin prize. The goodness doesn't stop there because his hat which is separated in another symbol, also plays the role of the wild just like he is, giving you two wilds to play with. The hat also plays the role of the scatter for dual benefits, which can graciously turn up to two other symbols into a whopping wild symbol.

Booming games has also come and offered his own take with the Medieval times, in the form of Wild Jester Slot with a 5-reel and 25-payline matrix. The leisure life and the foolish drivels of a realistic Jester fills the entire atmosphere of the game while utilizing varieties of special symbols that may just get you closer to its prized possession - the jackpot.

We recommend you take action now and enjoy what Jolly's Cap Slot machine has to offer through Lvbet Casino. Experience more spinning action with their promotions that will set your pockets higher, through massive amount of match-up deposit bonuses, a unique LV Wheel that can shower you with prizes the higher levels you open, hundreds of free spins and heaps more.