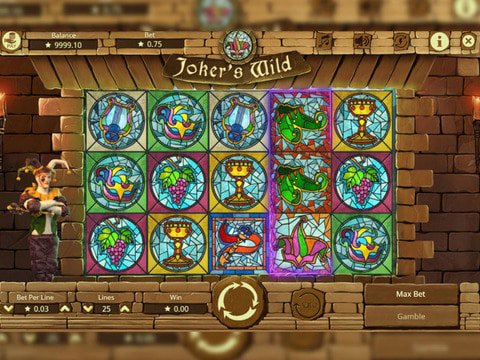 Lots of Jokers have already taken the limelight since antiquity some of which have already become iconic. However, do not be confused as the Joker presented on the Booming Games Software game centered on the aforementioned character, refers to a Medieval Jester, which more or less looks like the Joker on cards but with a function that highly relates to what it's called. Though this character is only there for the King's Entertainment, in this game, he's the one that could be your ticket to stardom as it provides regal and breathtaking symbols and reels that are more rewarding than you'd expect. You need not worry or hesitate to try the game in this page, as what's presented here is a no download and no registration Joker's Wild free play slot demo that's here to help you accommodate the game.

Trying your Luck with the Jester

You may think that it's a fool's errand to try and gain something from a Joker itself, but fortunately, the rewards are undeniably real for those who are fated and lucky enough to match the iridescent stained glasses portraying the symbols on this 5-reel and 25-payline game. The environment of the game presents the insides of the King's Court laden with bricks and candles that lights up the room. Though the joker himself cannot be seen as a symbol, he is standing at the side of the reels, playing the role of the mascot for the game to push you to your limit and motivate you to spin the reels. Bets on the game can reach up to a max of 75 coins per spin, while you'll see symbols from grapes, chalice, harp, jester hat, king's staff and the jester's shoes. The last three all possesses special features to help you venture the game with full capability on your hands. The hat could grant free spins and pay up to 375 coins anywhere it lands, the jester shoes is the iconic wild symbol of the game imbued with the power to substitute for other symbols to gain winning combinations along with the highest 75000-coin payout of the game, and finally the king's staff which could grant a special 2-way feature that could double your winning prizes for winning combinations. The game's audio and animations complete the game and takes it to the next level, making it hard to beat even by the most illustrious games of all times.

With the stellar qualities of the fast-paced game of Joker's Wild Slot Machine, it is pretty much difficult to find something on the same genre that could match it. One title you'd love to look into however, is the Lady Joker which tackles a rather intriguing premise but with a simpler graphics than you could have expected. The game is developed by Amatic with a cutting-edge 5-reel and 50-payline structure, equipped with simple classic design topped with a mind-boggling and breathtaking jackpot of 2.5 to 10 Million coins.

Despite the prize of Joker's Wild Slot Machine not reaching millions, it is still suggested to make sure you play it at the best place possible which on our perspective, is at Tropezia Palace Casino. There, you'll be able to indulge on fruitful match-up deposits bonuses and ongoing, updated promotions along with cutting-edge system and customer service to boot.