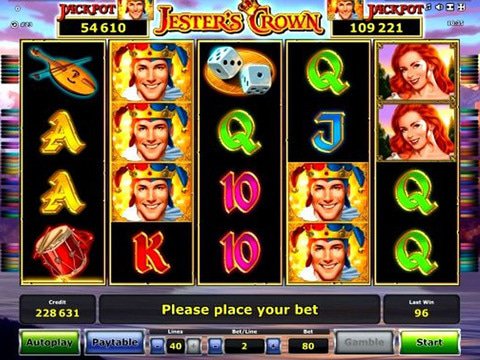 For those who have experienced playing Medieval games, there's no doubt that you already know that the Jester correlates to the Joker. Jesters are particularly renowned as fools of the Empire with their flamboyant outfits with weird shapes. However, have you ever seen a Jester who is actually part of the Royalty? Such a feat is simply unbelievable at first but, Novomatic Software has made such a feat, possible. Although there may still be much left to be desired in the game, it's nothing short of the most impeccable games of our new generation and as such, there's every reason for you to try it as well, especially seeing that you may really be curious about it. Expel your worries about risks and losing money by just trying out because there's the Jester's Crown free play slot demo available in this page. No registration and no download is needed to play it, and no real money is also involved.

Jester as a King

With the Jester holding the crown, you may think that everything would go down to ruins with a fool leading the country but in fact, even more fortuitous events await you due to him. Looking at the background of the game, you'll also see the vast lands adorned by the beautiful sky, which basically shows off the pristine empire of the Jester. The castle can even be seen on the right side, making the game look even more majestic. At the center lies the game's 5-reeel and 40-payline matrix but, with a less clustered appeal since the control system is actually integrated on the menu. Although this may seem like a hassle for some, it makes the game itself even more playable and less clutter would also allow the player to indulge more on the pristine graphics of the game which may indirectly motivate him to play more. The bet line can be adjusted accordingly in the menu and there, you'll also see the pay table of the game in order to accommodate yourself better on what the game really has to offer you with. There are card icons in the game which represents the bottom of the chain while there are various instruments present, a pair of die, a robin hood like character, a gorgeous red-haired woman, the crown and of course, the Jester wearing the crown. The game is already attractive as it is even with the lowest setup of betting range but if you max it out to 250 coins per spin, you'll even get unimaginable millions of jackpot, making the game perfect for low and high rollers alike.

Jester-themed games like Jester's Crown Slot Machine has always been present in the industry and another which you could play is Wild Jester Slot Machine from Booming Games. It does come with impeccable graphics with its 5-reel and 25-payline but, its beauty lies in its incomparable features that'll surely help you get your hands on the jackpot of the game.

We recommend you to play the jester's Crown Slot Machine at Cashpot Casino. New as this site may be, it holds esteemed bonuses to exploit such as a 300% match-up bonus up to $1000 of your initial deposit, a $10 no-deposit bonus and more outstanding features that'll surely convince you that it's the place for you.