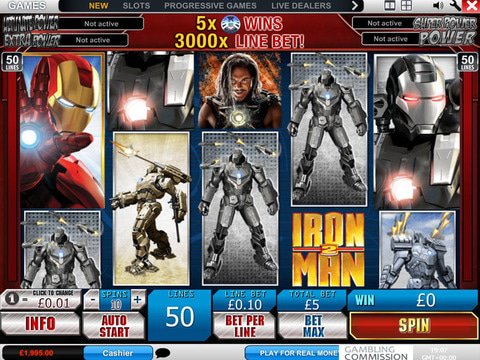 Whether it be on Marvel Universe or even beyond it, there's simply only a few heroes that could match up to the nationalistic and patriotic stand of the one and only Iron Man. Without the suit, Iron man is more known as Tony Stark and if his adventures through comics and movies have been something you've been following for quite some time, then you'll surely be astounded to know that you could indulge on it even while waging. Battle out the enemies of Tony Stark in the Iron Man 2 Slot Machine, developed and distributed by the Playtech Software. Get your breath taken away as you relinquish the unique, realistic atmosphere of the game based on the Iron Man 2 movie and even grab the chance to win staggering amounts of prizes. The Iron Man 2 Free play slot demo in this page would allow you to review the game without any form of risks so you could enjoy playing it even more.

From the audio of the game down to its visual graphics, it is definitely not an understatement to deem the Iron Man 2 Slot Machine as one of the best. The game is brimming with golden opportunities and you'll surely realize later on that getting winning combinations here is a lot easier than in any other game. This is because the game boasts one of the most generous lines of stacked wild covering up to 2 spaces on the reels. There are various iron man suits featuring a whole body image while two of the most iconic iron man suits in stack have a closer image and higher payout. Other symbols that have high payouts are Black Widow, Whiplash and Tony Stark himself. In order to defeat your opponent and gain one of the most massive jackpot of the game, you'll also need the help of the Wild Symbol and the Iron Man Scatter Symbol. The Wild could bring you up to 3000 coins as prize along with a substituting capability, while the scatter could grant you with surreal multipliers along with free spins to boot. Another feature that could be triggered if you're lucky is the Multi-Level Progressive jackpot of the game which may just be what you need to turn the tables around on your side.

When it comes to patriotism, Iron Man is certainly one of the best, warranting the Iron Man 2 Slot Machine with a top spot in the industry today. However, another hero that could more than match up Iron Man in terms of power and patriotism is Captain America and you'll surely enjoy his company as you play the Captain America Slot Machine which is also developed by Playtech. It runs with a 5-reel and 20-payline matrix topped with up to $5000 prize at maximum bet.

If you don't where to start playing this amazing game for real money, then we have just the right place for you. We highly commend players to experience the best of Iron Man 2 Slot Machine through the help of Slots Heaven Casino. You'll be able to play it via instant, mobile and download version, while indulging on numerous bonuses with an initial promotion of 200% match-up to a whopping $400 deposit.