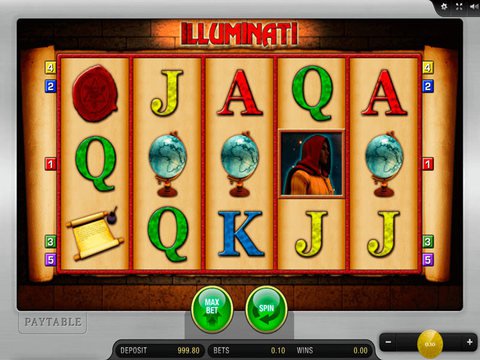 Dark it may be, Merkur Gaming proves that even the mysterious Illuminati can be used as a subject for slots machine, worthy for anyone to take a look into, through the Illuminati Slot Machine developed by them. There are many different views regarding this so-called secret cult which apparently isn't such a secret anymore. There are historical facts about its creation but their dark endeavor regarding their immense issue with the religion has sparked various ideas to those with rich imaginations which fabricated more and more fantasy-like facts about them which made them an even more interesting group to know more about for people. Get to know them better while earning huge rewards in this slot game. If you just want to try it out, no download and no registration needed - you just have to play the Illuminati free play slot demo in this page and see if it's really what you're looking for.

A look in a Dark and Mysterious Cult

Despite not having all the bells and whistles, there are pretty much a few things in this game that may just get you hooked to it. The Illuminati Slot Machine comes with solid and robust graphics but, with aesthetics that aren't the most cutting edge. The background is portrayed in ancient walls with dim lighting, giving off a more mysterious vibe for the game. It further lives up to people's expectation with its reels embellished on an ancient-looking scroll that is placed at the center for you to clearly see what you're playing with. A 5-reel and 5-payline structure is what you'll be able to indulge on in this game and though it may be extremely simple, it is rewarding nevertheless. Inspecting the reels further, you'll see Ace, King, Queen and Jack letters along with scrolls, a globe, the Illuminati seal and an illuminati wearing a cloak. The member comes with the highest payout of the game with 8000 coins to boot but, it can further double with the interesting Illuminati Feature of the game. Through this feature, you'll have a chance to heighten your rewards to new bars by gaining varieties of multipliers depending on your luck. There really are a few points of improvement needed by the game but, as it is now, it will still be worth your time especially if you're looking for quite a dark yet straightforward gameplay to place your hands on.

Net entertainment has also found a way to capitalize the Illuminati group the way Merkur Gaming used it in their Illuminati Slot Machine. The Secret Code slot from NetEnt will show you the more hidden side of the cult but, with the same mysterious dark vibe that will make you more thrilled throughout your spins. Not to mention, the 5-reel and 20-payline matrix of the game comes with seamless features that may just end up bringing up to $10,000 jackpot right to your pockets.

Meeting the dark group with your feeble money may not be enough but, if you play with Lvbet Casino you may just be able to boost your chances to grander heights. You'll be welcome with stunning series of match-up promotions coupled with free spins bonuses and more. There are reload bonuses as well, along with an exclusive LV Wheel feature with various levels and immense rewards to boot.