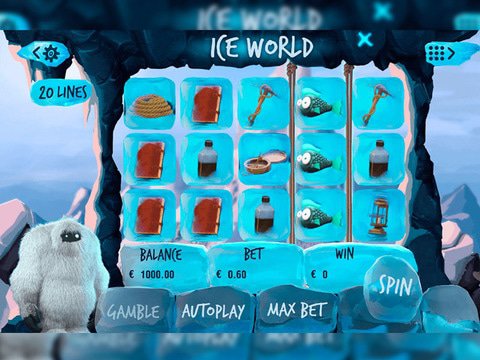 We all know that on the North Pole lives one of the most prominent figures in the world - Santa Claus and of course his reindeers, elves and other various animals. However, what lies on the other end of the Earth or the South Pole? Booming Games Software has taken up this task to provide a scenic and breathtaking view of the Antarctic along with what lies on the vast plains of Ice and mountains of whites in this region. The Ice World Slot Machine is just as how it sounds, as it will present to you an ice-filled environment that will take you to a visual trip across continents on the comfort of the four corners of your home. However, finding out if it does justice to the Antarctic lies entirely on your discretion, which is where the no download and no registration Ice World free play slot demo takes it role and help you experience the game with no risks and hassles involved.

Exploring the Chilling Environment of Antarctic

The moment you step on the absolute zero environment of the game or even below of that temperature, you'll see rocks laden with layers of whites and mountains of snows scattered about the backdrop of the game. Even the reels at the center contains symbols that are enclosed on hard-rock ice, strongly suggesting just how low the temperature is on the reels. At the side, you'll see a steadily standing abominable snowmen which may look intimidating at first, but is certainly more adorable than you'd think. This ice-filled game is made with a 5-reel and 20-payline structure, with betting range that can go up to 60 coins per spin. It may not look like something that a high roller would be willing to bet in, but it certainly has high potential for a rewarding experience. There are frozen compass, diary, liquor, lamp, rope and a pickaxe. These items are certainly remnants of failed attempts to explore the island while even fishes are frozen solid due to the temperature of the surroundings. Getting the rope and fish however, entails great things for you as the rope can bring you 900 coins along with its specials scatter feature that could award players with free spins while the latter has wild substituting prowess topped with the jackpot of the game that reaches up to a staggering 75000-coin reward.

Rabcat Software, though a tad less popular compared to giants of the industry, has also aimed to portray an iced world like the Ice World Slot Machine from Booming Games Software, in the form of the Frozen Diamonds Slot with a 5-reel and 20-payline matrix to conquer. The game is visually compelling, providing quite realistic and immersive artworks. The features and payout however, may not be the most enticing, but there's still lots to love from the gameplay of the Frozen Diamonds.

Venturing towards the great Ice World Slot Machine and its below-zero temperature could very well be one of your most treacherous adventures and spinning the reels via the Tropezia Palace Casino would surely do wonders in easing your journey. You'll be given a chance to earn up to free $100 with its match-up initial deposit bonus, topped with continuously updated promotions to look forward to while playing at the site.