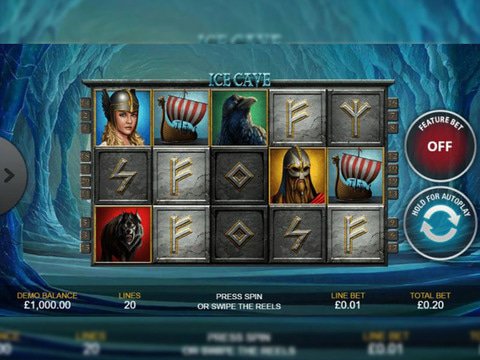 A World filled with ice, is something that's also filled with dangers and of course, beauties. Not even mentioning the majestic animals that you can find in such a setup, the surrounding and environment itself will surely never fail to amaze anyone. Playtech has developed a game that will bring forth the beauty of a snow-laden world entitled the Ice Cave Slot Machine. Although the game's setup has already been predetermined by its title, it will by far exceed your imagination. Even with a constrained setup, the game comes with flabbergasting qualities that will make you want to play more of it. If you're curious but still doesn't have the courage to truly step into this outstanding world filled with risk, then the no download Ice Cave free play slot demo will surely be beneficial for you. Not only is it a no registration version, you can play it for free until your heart's content.

A World laden with Ice

Whether it be due to the world being engulfed in Ice already or just your character being stranded on the extreme poles of the world, no one would certainly be able to deny the extreme coldness exhibited in this game. The beautiful and majestic ice that has lingered and filled the cave is nothing short of impeccable and divine and right at the center is a powerful 5-reel and 20-payline game that will surely give you a thrilling experience that ought to flame up your experience in this ice cold cave. The game itself comes with a very intuitive setup and a friendly layout that can surely be handled easily by any player. The controls are also easy to utilize and you can go from as low as £0.15 up to a staggering £30 coins per bet. The first thing you'll notice is truly the ice world in this game but, some may not realize that behind this beauty comes the fact that the Vikings have been stranded in this island. Vikings symbols fill the reels of the game along with a Viking man and woman, their boat and the fierce wolves and eagle of the Cave. The game also has an interesting play with its Wild Symbols which are consequently the Ice Wild and the Hammer Wild Symbol. These two comes with capability to both be substituted for other symbols but, they have unique effects. The Ice wild can turn cold and freeze on a reel, to be used in other spins but, when a hammer wild comes beside it and you win a spin, then the ice wild will no longer be frozen.

Without a doubt, the game is nothing short of fun and interesting and other than Ice Cave Slot Machine, there's also the Ice Picks Slot from Rival Gaming which ought to pique your curiosity. It provides a snow-laden world as well with the same gaming setup as the Ice Cave while also utilizing interesting features to aid you in winning.

We recommend you to enjoy the Ice Cave Slot Machine by playing it at Sports Interaction Casino. It provides a stunning 100% match-up to $100 along with other promotions like re-load bonuses, loyalty programs and more. It also makes use of an interesting software combination with superb support and banking options to boot.