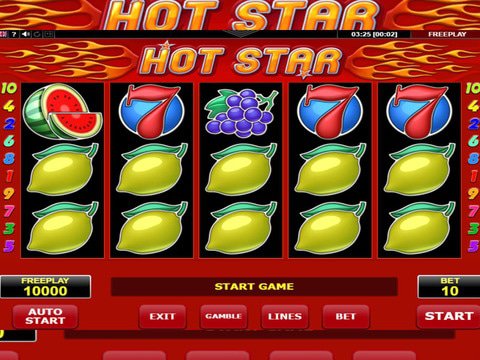 If you think that it's impossible to go Wild over simple, humble and classic games with their simplicity, then you'll surely find yourself proven wrong with the emergence of the Hot Star Slot Machine. This game is part of the Amatic Software's Hot Series Collection, providing it with a seemingly fresh and intense atmosphere that players have grown to love from this type of game. It is also infused with superior and extremely rewarding prizes known from the Hot Games which further reinforces why Canadian gamblers and more have found themselves addicted and stuck with the game. If you're being pensive about it, you could very well try out the game first before playing with real money. Look no further because with no registration and no download required, you could indulge and enjoy the Hot Star Free play slot demo with no further things to worry about.

Though it's called Hot Star, this game is far from being a space-themed game as it sticks to what its collection is known for already. The game's reel is set on top of a hot and intensely red backdrop. The Hot Star Title is embellished with cartoon flames that provides it with a hotter and fresher appeal. The reels on the other end of the spectrum, comes with black background that compliments the eloquent, vibrant, bold and deep characteristics emanating from the game's symbols. Also, though the symbols of the game are obviously from classic reels and machines, they're far from being simple. This is because of the game's betting range that goes from as low 10 coins per spin up to 500 spins for spin. With this, the prizes of the symbol are greatly increased to the point where you'll win hundreds of thousands with the lucky seven symbol. Other symbols of the game are cherries, lemon, grapes, watermelon and the Wild Symbol. The Wild comes in a burning star symbol which could probably be where the name of the game came from. What makes the wild of this game different from others in its league and collection is its capability to turn all of its neighboring symbols to Wild as well.

You'll certainly feel the intensity of the Hot Star Slot Machine's gameplay with its enormous prizes. Another game of its type is the Sizzling Hot Slot from Novomatic with a simple 5-reel and 5-payline gameplay. It may seem simple and retro like the Hot Star, but it possesses quite a stellar set of prizes as well. In fact, the jackpot prize of the game is a whopping $250,000 prize, making it an extremely convincing game that would put one in a state of aggressiveness to play it immediately.

Choosing a place to play the Hot Star Slot machine could be easy if you don't think it through, but if you want the best and only the best, you'll surely be happy to heed our suggestion to play it via the Mars Casino. It's one of the most spectacular in the line of establishment under the Amatic Software's and with its mountains of promotions from match-up deposits up to $400, reload bonuses and even free spins bonuses, you'll surely feel that you're finally optimizing your gameplay experience.