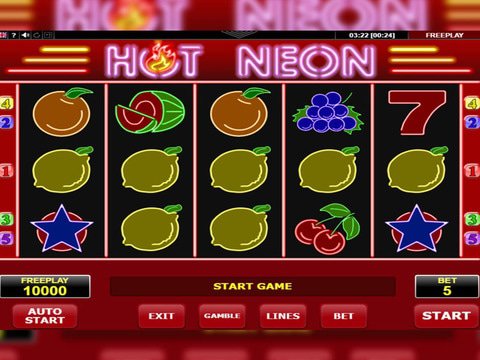 Fruit-themed slots have all become too common already to the point where you'd even have the urge to ignore even newly developed fruit games. However, don't plan to do that just yet especially with the advent of the Hot Neon Slot Machine in the industry. Developed by the one and only Amatic Software, this game is included in the Hot Series of the software and is characterized by its outlandish, zany and incredibly rewarding gameplay in a classical setup that certainly distinguish itself from competitors. It may not hold the most aesthetically appealing graphics, but it's most certainly attractive enough compared to other classics. This characteristics have made it reel in even Canadian Gamblers and if you're intrigued, you could certainly jump to the fray right away. No download and no registration is also needed if you just want to try it out through this page's Hot Neon free play slot demo.

The game's graphics is incredibly compelling and aesthetically compelling not because of any complex symbols or design, but the game's quirky play on colors. The backdrop of the whole game comes with neon red and an incredibly noteworthy title. The reels at the center is brandished with black color and symbols with simple yet bold simple symbols. When you get winning combinations, the symbols part of your combination will light up in an animated glow that will certainly keep anyone in awe of the game. The game's structure is a simple 5-reel and 5-payline matrix, but its waging range could get from 5 to 500 per spin. The symbols on the game are as classic as possible from Cherries, Orange, Grapes, Lemon, Watermelon and Lucky Seven, but with more lucrative wins. In fact, the lucky seven could grant up to 500,000 coins by just getting 5 of it on a payline. There's also the star symbol treated as the scatter of the game, which could grant up to 15 spins when you get 3 or more of it on your reels. Though its simplicity is oozing from start to finish, it comes with a direct attack on waging with astronomical prizes to boot which warrants it the attention of the public.

Looking for another unconventional fruit game that separates itself from the crowd like the Hot Neon Slot Machine? The Royal 7 Fruit Slot from MrSlotty will surely give you the satisfaction and lucrative experience you may be looking for. As expected from this game, it's filled with diverse fruits from the common ones to kiwi, pineapple, pears and more. The betting wins however, only stretches up to 500x your winning bet, which may be incredibly lacking compared to the whopping and astronomical prizes set by Hot Neon.

If you want to, you could enjoy the game while maximizing the wins you could get through utilizing bonuses and outstanding characteristic of the establishment where you'll play it. The team suggests that the players eyeing the Hot Neon Slot Machine, play it via the Mars Casio. Whether it's free spins bonuses, no deposits bonuses or match-up deposits, the game has it all and there's no doubt you'll find it incredibly lucrative and safe to play at the site with its reassuring reputation that resounds all throughout the industry.