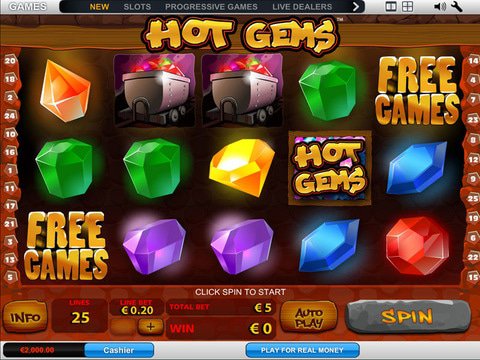 PLaytech, one of the giant software developer in the industry, definitely isn't a fan of toning down what they produce. One after another, they create stunning and vivid games that would take the industry by storm and one example is certainly the Hot Gems Slot Machine. Fill your room with the sparkling luster of colorful gems that will surely get you hooked to its unique universe. Themes like this may be far from being new, but not every game you'd find in the market would be as stupendous as this one. If you're still hesitating to put down your money on this game, you don't have to play for real right away as this page provides a Hot Gems Free play slot demo that you could absolutely play with no risks. No registration and no download is even needed so you could review the game right off the bat with just a few clicks.

Other than being a gem-themed game, Hot Gems Slot Machine happens inside a mine with a jolly, old miner doing all the work which makes it a mining-themed game as well. The game is set on a brown backdrop that makes it apparent that you're on a mine while the symbols come in 3D visual appearance that makes everything even more stunning. The flamboyant and vibrant play on colors truly befits the theme while the controls will bring you a worry-free experience you won't be able to forget. The game runs on a 5-reel and 25 fixed-payline matrix with betting range that can go from €5 to €125 per spin. It also has an auto-play version for those who would like to be more lax in playing while an information button is present for those who want to know more about the symbols of the game. The game also has a defining, collapsing feature that provides it with a higher winning rate and a more fancy mechanics. The miner also randomly appears to dance at the center which makes the game even more fun. Other than the gems symbols and other related symbols to the game, The Wild symbol with substituting capabilities, the Hot Gems logo that's treated as the scatter, and the Free Games symbol for free spins, are definitely the symbols you would want to land on your reels.

Gem-themed games like the Hot Gems Slot Machine can be taken to various routes depending on the creativity of the developers. The Hot Gems Slot brings players inside a wild mine, while another similarly themed game, the Starburst Slot, will take you to the space and beyond. It's developed by Net Entertainment while boasting a humble and simple 5-reel and 10-payline structure. Its jackpot may not be the biggest with only $2,500 as the prize, but what it certainly takes pride on is the overall experience which it could serve.

We greatly suggest to play this game in no other place than the Slots Heaven Casino . Whether its security and advantages you're looking for, this establishment has it. It has even prepared a luscious 200% match-up deposit promotion to a max of $400, while providing regular updates to their promotions table. You can play it anywhere you are as it is also available via mobile, download or instant-play versions.