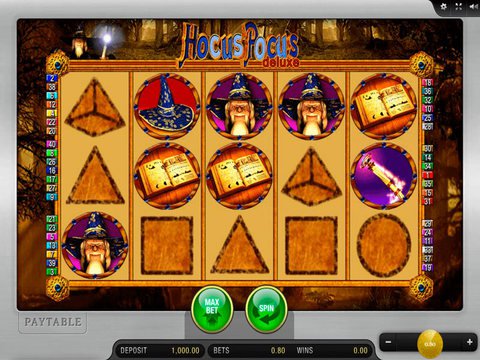 Who says magic gets boring the more you delve deeper into its world to the point where you would not want to visit it the second time around? Merkur Gaming, creator of the breathtaking world of Hocus Pocus, will prove you wrong as it provides a sequel for its Hocus Pocus game, in the form of the Hocus Pocus Deluxe Slot Machine. It sticks to everything you love from the original game, which garnered quite the reputation in the industry as well. What will surely reel in more users into this game is the curiosity of whether it can really bring up magic into a whole new level than it had before or will it not? Find out more about what the conclusion would be by trying it out yourself with the Hocus Pocus Deluxe free play slot demo. It needs no download and no registration, and you can even read below for further knowledge on what the game has while waiting for the game to load.

Brighten up your World with the Splendor of Magic

Rediscover the world of magic brought by the Hocus Pocus Deluxe Slot Machine. Just with its aesthetics alone, it is crystal clear to see that the Merkur Gaming has definitely up their game to a whole new level than its predecessor. It has better graphics with more solid and vibrant appeal which showcases the splendor of the world better than ever. The background motif is the same as it will show you a pristine fantasy forest with a mysterious vibe packed with a huge 5-reel setup that's equipped with a 40-payline matrix. The mechanics of the game transformed as well because now, it comes with a fixed payline rather than its previous changeable lines. You'll see the wizard of the game as well, along with familiar symbols like the magic hat, book, staff and the powerful shapes which you can use to craft magic symbols. There's also the magic hands which remains as the wilds of the game along with the magic ball which also comes with the same ability as it has on the original game, still playing as the scatter. A great feature added to the game however, is the red magic exploding ball. When you have these in your winning combinations, it'll explode and the reels will go down to fill the spaces and re-spin to give you a deluxe additional winning chance. If you feel like this world is something you could conquer further, try the gamble feature as well to spice things up to a whole new level.

Path of the Wizard slot from Microgaming, is also a magic-themed game you could try. It will take you to a darker take on the magical world, giving you a chance to be one of the wizards by fighting it off with other powerful masters. Do you have what it takes to win in this 5-reel and 25-payline game packed with a 2500-coin jackpot prize?

Feel the thrill of the Hocus Pocus Deluxe Slot Machine at its maximum with the Lvbet Casino which will jumpstart your experience with its flavorful promotions from an initial deposit match-up of 100% to £200, 200 free spins bonus, reload bonuses and a series of other match-up bonuses and regularly updated promotions.