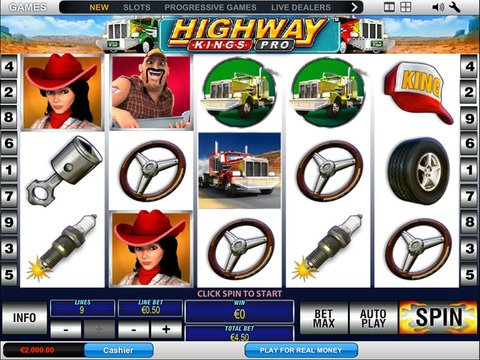 Hurtling down the road with a big old truck can never be as fun and intriguing as how Highway Kings has portrayed it in its amazingly flamboyant reels. The game comes back with the same, strong and flashy appearance, but with an ever more improved graphical appearance, prizes and more in the Highway Kings Pro Slot Machine. Make noise as you ravage across the cold cement in this game developed by Playtech and see for yourself, the capability of this software that has brought it to fame throughout the years. This game more than lives up to its predecessor and reputation and you'll surely be more than glad to review it yourself through this page's Highway Kings Pro Free play slot demo. Free yourself from worries as the game requires no download, no registration and no hassles whatsoever, allowing anyone to enjoy playing almost immediately.

The reddish land with the dazzling sky playing as the backdrop of the game, there's no doubt that you'll feel its theme right from the get-go just after you've entered its universe. At the center, you'll see the 5-reel and 9-payline structure covering the whole width of the game and majority of its height, while placed at its bottom is an organized control system that will make it easy for professionals and beginners alike to play the game and manipulate its features in a cinch. The symbols of the game may be oddly familiar to some since they came from its predecessors, but their appearance surely outclasses the previous version of the game. The 3D parts of the car along with the dice and cap symbols are the lower symbols of the game while the green truck, gas station and the red big truck are higher-paying symbols. Watch out for the truck girl as she awaits you as the scatter of the game that could rain you with free spins and more. You'll also be more than glad as another bonus feature can be triggered if you luckily get the black and white flag. Helping you gain the upper hand even more is the truck driver, playing the role as the wild symbol of the game which could be used to get winning combinations a lot easier than ever.

If the Highway Kings Pro Slot Machine and its trucks are too slow for you, then speed up your gameplay with the Racing For Pinks by Microgaming. It boasts a whopping 5-reel and 243-payline gameplay with a jackpot that can go as high as $6000. It also makes use of scatters, wilds and other special symbols that could award you free spins, multipliers and more benefits to boot, which may just be what you need to push you towards the winning end.

Get the best out of your highway experience in Highway Kings Pro Slot Machine, by picking out nothing short of a phenomenal site. Here, we recommend players to take deep consideration in choosing Slots Heaven Casino as your place to go. It comes with a sweet 200% match-up to $400, while its availability tops other sites with its flash, mobile and download versions. Play without any worries as the site is also highly secured for a pristine overall time.