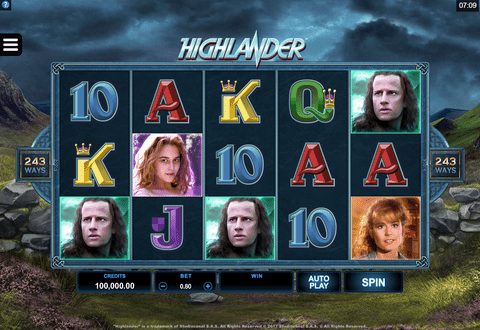 Based on the story of an immortal swordsman, the Highlander has become a famous film and a television series. This story has been known to many. No wonder why the Microgaming software has built a game out of it. Get the chance to review the Highlander slot machine on this page using the demo version that requires no download. The trial mode is free so players can enjoy it without spending any cash.

The main casts of the film are shown on the 5 reels of Highlander slot machine. Players will meet the swordsman named Connor MacLeod, his love interest named Brenda, and his enemy named Kurgan. This video slot has 20 pay lines that can be adjusted according to the player's preference. Images of our protagonist are present on both sides of the reels. Since the movie is quite an old one, the graphics are also outdated to match the ambiance of the film. It is interesting to play such game about an immortal swordsman and his journey.

In order to meet the mighty highlander, players must place their bet. The minimum amount accepted is as low as 0.01 while the maximum is 25. Given the 20 pay lines, players can increase their bet for up to 500 credits in a single spin. Auto-play feature is also available on this game for a less hassle experience. Highlander slot machine allows players to automate up to 25 spins. All these configuration buttons can be found at the bottom of the screen. It is highly customizable to fit the needs of different types of players.

Our highlander does not only possess a fighting sword, but also special symbols. Scatter and wild symbols are present in the game to increase player's winnings. When players hit at least 3 free spin symbols, they will be rewarded with a certain number of additional spins. There is also the sword symbols that will let players pick a tile with corresponding prize. Another feature to anticipate is the bonus battle wherein players can help in fighting Kurgan and win instant rewards.

From Theater to Gaming World

Creating a gaming machine based on a movie film is not a new concept in the gaming world. In fact, there are plenty of popular titles that were turned into a game. Basic Instinct slot machine can also be a good choice aside from the Highlander. The game version of this mystery film has also been a hit. It has 5 reels that allow players to stake on 243 pay lines.

We recommend players to try the Highlander free play slot in Jackpot City Casino with no registration required. This gaming site is so popular among Canadian players because of its free spins and bonus. Another great thing about this casino is that it can be accessed using different mobile devices because of its responsive design. Players will definitely enjoy the game wherever they are, even on the road.