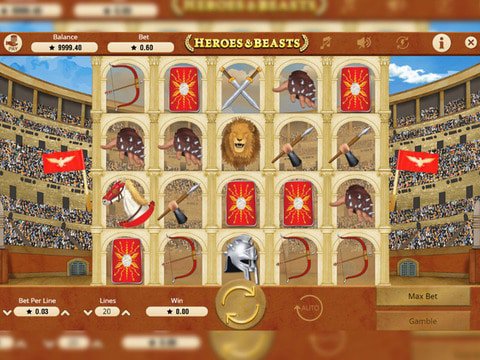 The Ancient City of Rome has been known for various things - from their glorious bouts and triumphant wars against various Ancient Cities, to their vast intelligence, number of beauties and powerful men. However, out of all those, there are also structures that lives to tell the tale, one of which is the everlasting Colosseum where gore and blood has been spilled for countless ages in the past. Dreadful, devious and odd as it may be, there's no denying it that bloodshed in the wild stage of Coliseum is one of the most ridiculously popular entertainment in the days and Booming Games Software has aimed to show this ruthless truth through the Heroes and Beasts Slot Machine. At the upside of this outstanding creation, comes a very rewarding environment that will make you want to enjoy the loud, intense and adrenaline-filled environment of the coliseum. Want to find out more about it? The no registration and no download Heroes and Beasts free play slot demo is for you.

Onwards to Triumphant Wins and Wealth

Despite the gruesome history of the Colosseum, the epic and glorious gameplay of the Heroes and Beasts Slot Machine simply can't be contained and restrained any longer. The audio that will welcome you to the game will build up the adrenaline and excitement within you and each spin will surely make you want to spin the reels more. The game is set inside the colosseum with your perspective overlooking from the center of the establishment. Hundreds or even thousands of people are surrounding the reels at the center which cages in various symbols that could very well award lucky players with powerful rewards. The game comes with 20 pay lines, which can easily be manipulated via the intricate and elaborate controls of the system. You could also change the betting amount, decrease it or increase it up to 60 coins per spin. Though the symbols may not be the most appealing part of the game, it still instills the right mood to the game with spiky creatures, pikes, helmets, bows, pitch forks, shields, dual swords, horse, lion and even a bear. The lion acts as a scatter to provide free spins to players while the powerful bear could grant up to 75000 coins jackpot for those who could conquer it. If you couldn't complete a pay line with it, it could still help you finish winning combinations with its wild substituting ability.

Habanero has also aimed to provide a glorious rendition of the Roman Empire centered on the Colosseum like the Heroes and Beasts Slot machine in the form of the Roman Empire Slot. It is equipped with a 25-payline matrix nestled on a 5-reel machine. It's a game for all races and culture with a very compelling art and graphics that will plunge you in adrenaline-filled experience with a chance to win up to 3000 coins of jackpot.

Booming Games Software certainly pushed itself in creating the Heroes and Beasts Slot Machine and we highly suggest that you make the most out of it by playing the game through Tropezia Palace Casino. This way, you'll have more juice to play with ongoing promotions, VIP club bonuses and match-up deposits bonuses to boot on top of an instant-play version for ultimate convenience.