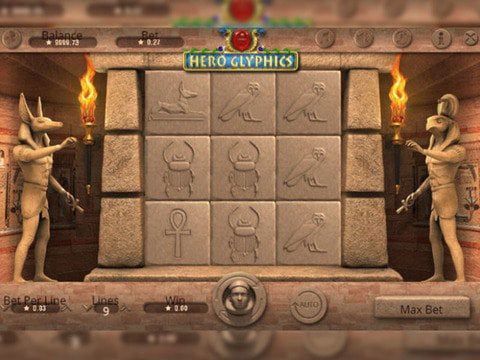 Ever since the dawn of times, countless civilizations have risen and fallen through various lands with unequal popularity throughout the globe. There are those who've etched themselves far deeper and more solid on the annals of history such as the prestigious Egyptian Civilization that has reigned supreme for centuries. This kind of deep background with rich amount of historical recesses from ancient times, has allowed it to become one of the greatest inspirations for various works including the gambling industry. The Booming Games Software also didn't allow itself to be left behind by the overflowing amount of Egyptian-themed game, thus creating the Hero Glyphics Slot Machine that's imbued with everything that will pique your interest from the Ancient Egyptian Kingdoms. With its vast competition, does the game have what it takes to come up on top? That's for you to find out through the review below and the no download and no registration Hero Glyphics free play slot demo in this page.

A Trip to the Mysterious Cradle of Egypt

With the vast amount of Egyptian Slot games in the internet and the amount of ancient temples and abode that can be found in Egypt, it is only safe to say that the Hero Glyphics Slot Machine features one of these temples, and a very prominent one at that. Proof of this is the fact that two fascinating and mighty statues of Gods are placed at both sides of the game's screen, allowing the game to ooze a mighty aura that permeates the prestigious status of the Grand Civilization. The game's overall graphics is nothing short of what you'd expect from Booming Games Software as it comes with ultimately realistic elements made intricately down to the finest detail possible. Even the torches that lights up the temple creates the right amount of mood that will keep a player exploring the recesses of this mystical abode. At the center lies the reels made of rock with a 3-reel and 9-payline structure that's ready to be spun by players. Bets can go up to only 27 coins per spin which may not be enough to entice players, but the breathtaking symbols from flamingo, scarab, owl, Anubis, lion, ankh and eye of Horus, are certainly more than enough to convince players to give the game a spin. It also holds common special symbols from scatter to wilds, embodied by the ankh and the eye of Horus, respectively.

Setting aside those games that are already overly popular in the Egyptian-themed category, another game in this genre that's worth taking a look into is the Cleopatra's Secrets Slot Machine by SkillonNet. It provides a 5-reel and 20-payline gameplay structure with an art approaching a cartoon and comical look. It may not be as visually compelling as the route of the graphics of Hero Glyphics Slot Machine but it more than lives up to the hype with its $10,000 jackpot prize.

Even if you're familiar with an Ancient Egyptian Temple already, we still suggest going thorough on your adventure by playing Hero Glyphics Slot Machine at Tropezia Palace Casino. Not only will you be guarded with tough security and supported by superior customer support - you'll also be able to revel on various promotions from match-up deposits and more with the site's instant-play version.