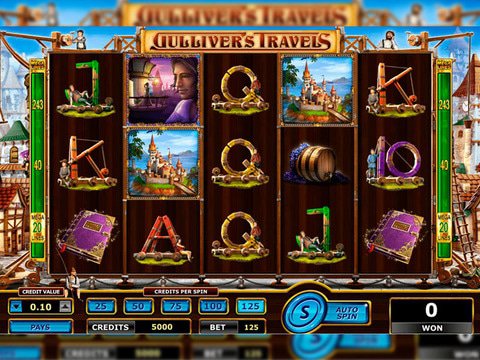 Whether you're referring to the literary product or the screen adaptation of the Gulliver's Travels, there's no doubt that you'll find both to be very electrifying and exciting enough to steal your attention for quite some time. The Gulliver's Travels Slot Machine developed by Amaya Software utilizes this timeless and classic story and refined it into a slot game that's bound to set the bars higher for adventure and action games with a bit of fiction. If you're aware of the movie and the novel, you'll surely be able to appreciate the game more however, even if you don't, you'll still find it very compelling. The Gulliver's Travels free play slot demo in this page comes with a no download and no registration procedure, giving you the chance to test out the waters and learn more about the game without worrying about slashing your pocket full of money.

A Voyage to Unknown Lands

In the Literary work of the aforementioned title, Gulliver experienced seven magnificent adventures but in the movie, only one was featured. That one adventure featured in the movies is the first voyage of Gulliver towards the mysterious island of Liliput. This is where the Gulliver's Travels Slot Machine takes place and there's no doubt that you'll find the place incredibly nostalgic if you have already watched the movie adaptation. Despite it not being based on the movie's appearance of characters, the place of Liliput was depicted just like how it looked on the screen. You'll see the town at the background, developed in a magnificent way that makes it stand out. The compelling graphics of the game is nothing to belittle as it can probably rank in the upper echelon of the whole slot industry just with that alone. At the center, you'll see the robust, vibrant and crisp reels containing the high-quality symbols of the game. Inspecting the game's pay table, you'll be able to clearly see the symbols of the game from the card icons with decent payouts, to astounding high-value symbols from barrels, books, the palace, Gulliver's meeting with the princess, the trapped Gulliver and even Gulliver pulling the ships of Liliput. The Pulling Gulliver is the wild of the game while the fleet of ships is the bonus symbol of the game that could award free spins. The game also comes with a whopping Mega Line Feature on top of its 243 ways to win paylines, making it evident that the game is more rewarding than you'd expect.

The Adventures presented in the Gulliver's Travels Slot Machine is undeniably exhilarating but other than it, there's also the Tomb Raider 2 Slot from Microgaming. This game comes with a 5-reel and 30-payline structure with thrilling symbols and environment that will exhibit the dangerous yet highly electrifying adventures of Lara Croft. Aside from the fact that you'll be able to enjoy Lara Croft in action, the $18,750 jackpot of the game is reason enough for you to stay in the game and spin its reels.

To get the most out of your travels in Liliput, we advise that you spin the reels of the game with Cresus Casino. You'll be able to play more with their bountiful promotions and features while you'll stay worry-free with its superb customer service and unrivaled security.