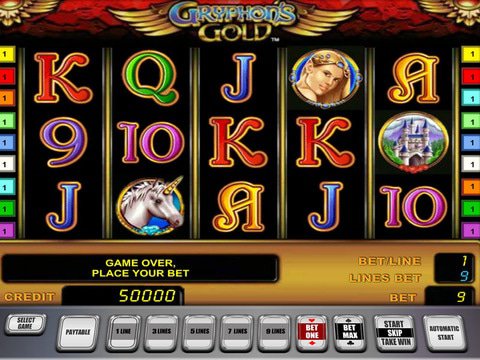 If you're a certified fairytale junkie, then you might be familiar with the Gryphon - commonly known as the griffin in the fairytale world. This creature has the body of a lion and the head and wings of an eagle. It is also one of the most popular mythical characters because of its ability to fly over vast lands, defend kingdoms from the skies, and dominate every battle it might be in. Despite of its hero-like features, it can also unleash a devastating fallback when it dominates other kingdoms. In Gryphon's Gold slot machine, you are tasked to defend the kingdom of Winalot from the attacks of the Gryphon and save your peers from being taken away. You can now start defending and participate in every battle on this free play slot here with no download required.

This five-reel slot machine developed by Novomatic software has nine unique paylines for its online and mobile players. You may place wagers for as low as one coin up to a 100 credits per line. If you're brave enough to man up and you can place the maximum stake of 900 coins per payline. The higher wagers placed the more chances of winning huge amounts of payouts and bonuses on the reels.

Just like any other slot machine game, you must land winning combinations on active paylines to win on Gryphon's Gold. These include combinations of gnomes, toadstools, unicorns, maidens, the palace, the Gryphons, and the Tree Men. It also has the conventional card numbers and letters which reward you the least amount of payout available.

A combination of gnomes or toadstools pays you 25,000 credits at most. This is followed by a set of the palace on an active payline which rewards you with 40,000 coins. Rescuing the maidens or the unicorns will grant you a huge payout worth 75,000 coins. All these payouts are based on a maximum stake placed on a winning line.

The Gryphons represents the wild symbol of this game. It automatically replaces any character - except for the scatters - on the reels to complete a winning combination. This wild symbol will also pay double the equivalent payout of the combination made. If by chance you land five Gryphons on an active payline, you win an instant prize worth 900,000 coins.

In terms of the game's special features, Gryphon's Gold slot machine offers you an exclusive scatter bonus which is only triggered when the Scattered Tree Men symbols appear on the reels. Find three or more scatters on the game screen and you will be rewarded with 15 bonus games. During these free games, all accumulated prizes will be tripled.

If you're lucky enough to line up five scatter symbols on an active payline, you will instantly get a 450,000 credits.

Another special in-game feature of Gryphon's Gold is its gamble feature wherein you have the chance to double your prize after every winning round.

If you can't get over your fairytale fandom, then you might want to try Microgaming's Ariana slot machine. Ariana is a five-reel - mermaid themed slot machine game - which offers its players with 25 paylines. It also has expanding wild bonuses, stacked symbols, free spins, and a maximum jackpot worth $125,000.

You may now try the demo version of Gryphon's Gold, with no registration requirement, in Cashpot Casino. All Canadian gamers are also welcomed to participate with exclusive no deposit and free spin bonuses with real money wagers.