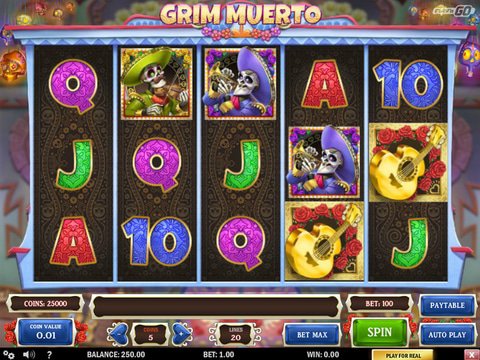 The Grim Muerto slot machine, produced by the people at Play 'N Go software, has five reels and 20 paylines, with a Mexican theme. It commemorates the Day of the Dead ceremony, with all the trimmings, including a Mariachi band. It can be played on all platforms, including your mobile device, and one of the nice things about it is that on any given round, you can win up to 2500 times your wager. The wild symbol is a guitar, and there are two scatters, which come very prominently into play. Even if you don't see enough of the scatters to get to the free spins, you get a second chance, and that's nice. We cordially invite you to give the Grim Muerto free play slot a try right here on this page, as it is a piece of no-download software and does not require registration.

When you play this five-reel, 20-payline free play slot from Play 'N Go, you will eventually notice that the wild symbol (the guitar) is "expanding," which means that it can replace other symbols on the real it appears on. The "catch" is that must be on a reel that was highlighted before the round starts. There is also an "extra" wild, which is a Mariachi band member. Keep in mind that having five guitars (wilds) on a payline will bring you 50 times your wager.

The two scatters are a Book and Candle. When you have a Book on reels 1, 3 and 5, it triggers the free spins feature, and that will bring you ten free spins that can then be re-triggered. The Candle symbol, another scatter, will also bring you something extra; one of them produces three more free spins for you, while two of them will give you six free spins. Now here is something you want to pay attention to - on each free spin, there will be anywhere between two and five reels highlighted. When a wild (guitar) or extra wild (Mariachi band member) lands, it will replace all symbols on that reel, thus increasing your win probability.

Even if you only get two Book scatters on the reels in the main game, you can qualify for the Second Chance feature, where you can select one of four Mariachi band members in the pursuit of winning a cash award or getting some free spins. There are many customizable features, including Autoplay, where you can set any of five different durations, as well as special settings, such as stopping on any win, or, stopping at free spins or at a bonus game win. It's all up to you. The coin range is from 0.20 to 100.00, so everybody can play.

Where to Play the Grim Muerto No-Download Slot Game

You'll find that some of the aspects of the Grim Muerto free play slot game bear similarity to Microgaming's Pistoleras, a five-reel, 25-line slot with free spins and Autoplay, but they don't give you a Second Chance. And it is indeed unique to celebrate the Day of the Dead. Yes, we know it sounds like a horror film, but it is actually a holiday where Mexicans remember their friends and family who passed away. The Grim Muerto slot machine, in its virtual, real-money form, can be played by Canadians in a number of different casinos, including LeoVegas, where you can get a 200% bonus, along with 50 no-deposit free spins. Bueno!