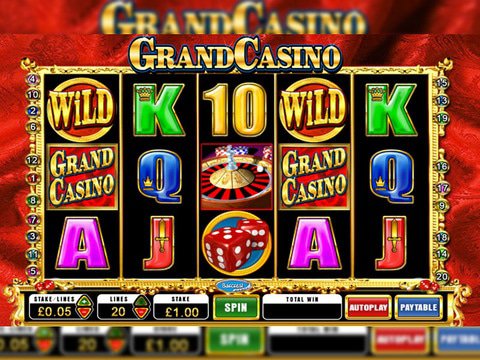 Despite the accumulative fame of online waging since its advent, which has made it more dominating than any other brick and mortar gambling establishment, there are still players who would traverse long travels to experience the exhilarating gaming experience served by these land-based establishments. However, the web-based waging establishment proves to be no pushover as there are those that could bring the land establishment to the reels such as Barcrest Software. This company proves yet again that their experience in the market even before they were bought by another company, is still their greatest weapon as they developed the Grand Casino Slot Machine. This game also falls on a royalty-like theme, presenting the reels in a way that shows superior grandeur and elegance. If you want to bathe on the superior gaming experience promised by this game, the no registration and no download Grand Casino free play slot demo in this page will allow you to do so with no hassles and risks.

A Royal Establishment on top of the Reels

With a background that shows off a grand red fabric that's unquestionably used by royalty along with reels and controls that are enclosed in elegant and magnificent golden borders, it is easy to see that the game exudes an air of superiority that would let you know that lots of prizes awaits you as you spin its reels. Its reel system only composes of a 5x3 Grid powered by 20 pay lines, which are easily manageable with the control system of the game that's set directly below the reels. This game is fit for all users, whether low or high rollers, which is presented by its wide betting range that can go as low as £0.20 up to £500 in each spin. Of course, though the risk is higher with higher stakes, the amount you'll win while doing so will surely prove to be more mind-boggling as well. The game comes with pretty common icons from card symbols, logo of the game and also a wild logo symbol which pays quite a hefty sum with 10,000x your bet. Along with this whopping prize, there are also bonus features in the game that will bolster the amount you could possibly win such as the roulette bonus and the Dice feature that could provide topnotch rewards, free spins and multipliers.

If you're looking for another game that will show you another side of the Royalty that's different from what the Grand Casino Slot Machine offers, the Royal Banquet would surely fit you. It is developed by Saucify and imbued with artwork that looks cartoonish and has over 20 pay lines for its 5 reels. The game makes use of several helpful features and symbols, with a jackpot prize that could hit up to $12,500, which may not be that much for extremely high rollers, but is already enough to bring any low to mid rollers an electrifying experience.

Advantages will play a huge role if you want to dominate the reels of Grand Casino Slot Machine and Drueck Glueck Casino will surely serve you with those benefits. Not only does it present a 100% match-up to a hundred bucks, there's also 25 free spins that goes with it, along with availability in 3 different ways from download, instant and mobile.