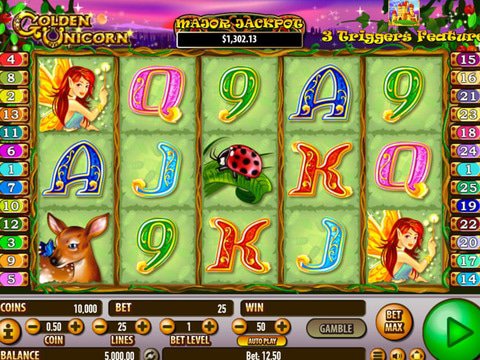 The Fantasy genre is indeed one of the broadest genre out there especially those exploring the depths of worlds containing various mythical beasts. Canadian players may not be the fondest of Unicorns, but there's a chance that you'll shift your beliefs about this mythical creatures once you explore its magical world in the Golden Unicorn Slot Machine. This game, developed by Habanero, is visually stunning in its own way and it will bring you to the story of the unique Golden Unicorn, which even among Unicorns, is incredibly rare as well. Its gold color boasts a golden shine that will make you think about wealth and riches, making it the perfect game to play. Try out this game and get a look at the glorious wealth it could bring to you in this Golden Unicorn Free Play Slot Demo. The demo will allow you to get a good review and feel of the game with no download and no registration to hassle you with.

The Golden Unicorn Slot Machine comes with a cartoon kind of art that may be lackluster in terms of depth and details, but its beauty is simply stunning as it carries an air of simplicity that many wagers would surely be able to appreciate. The reels are submerged underground and up above it is the colorful world of the Golden Unicorn. The dark color of the ground complements the colorful reels as well, making it even more astonishing to look at. The controls of the game are also nothing short of extraordinary as you'll have plenty of options to tinker with to bend the game to however you want it to be. The pay table is also very easy to understand as there's a clear option containing everything you need to know about the reward equivalents of each symbol and combinations. It is still imperative however, to bear in mind that in this 5-reel and 25-payline game, there's a normal Unicorn that will give you free spins while the Golden Unicorns itself can give you multipliers and help you get more winning combinations. Aside from those, if you're feeling brave enough, you can also go and risk your winning spin and gamble it in a double-or-nothing extra game which is pretty sweet if you ask me.

Another fantasy game that you'll surely be dying to play as well is the ever-famous and renowned Zeus Slot from WMS. This Divine 5-reel and 30-payline game is one of the best and is critically acclaimed not only for its total gameplay, but its availability in both personal computers and even mobile devices. However, it has a pretty small jackpot prize of about $2500, which may be pretty big for some, but are absolutely not that interesting for high-rollers.

Reveling on the Golden Unicorn Slot Machine can be more rewarding if you join the Club Gold Waging establishment. This critically acclaimed site will allow you to explore the magical world by giving you an initial deposit match-up promotion that could double up your money depending on how much you withdraw, with a max of $2250. Access the site instantly or download it for more convenient future usage and have a grand time looking for fortunes you desire in this game and site.