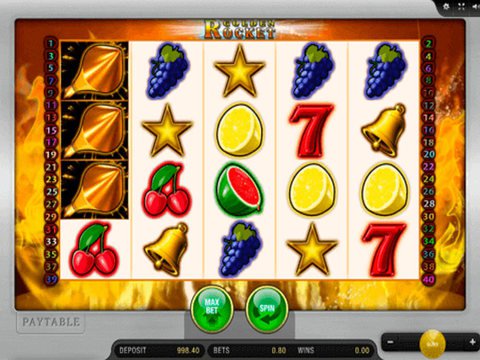 Golden Diamond, Man with the Golden Gun, Golden Gate--these are just some of the themes of online casino slots. So why not a make a Golden Rocket slot machine? It does sound as logical as the rest, plus it has a nice ring to it. This title from Merkur Gaming can also be played for free from LVBet Casino. The demo will allow you to practice your skills up to the point that you are confident enough about gambling with your money. The online casino site caters to Canadian players and offers 100% of the welcome bonus of up to $200. It's 100% certified with a payout percentage of 96.75%.

With a name like Golden Rocket slot machine, you would think this one is about space exploration. Nothing could be further from the truth. In fact, you would be hard pressed to find any symbol that has something to do with space. There's not even a clear depiction of a rocket. There's a golden something, but it's more like a yellow bulb. If not for the name, you would not associate it with a rocket at all.

Instead, you get fruit symbols like an orange, watermelon, grape, strawberry, and cherry, as well as a golden bell and a golden star trinket. The minimum bet for this game is $0.04 which can scale up to $40.

Ready to Party, or Not

The intro to the game promises a party. Once the slot machine starts, however, it seems like you are in a funeral because of how quiet it is. There's no audio! That can be a problem to some because the sound of reels spinning can be a reward in itself.

You can expect to find five reels in three rows with 40 pay lines in this game. The golden rocket (if it can be called that) is your explosive symbol. But the wild can substitute for all the symbols except for the scatters.

Two buttons at the bottom of the screen will allow you to adjust your coin value. You can go all the way up to the max bet if you are a high roller. You can also choose to engage the auto feature which will order the machine to spin the reels for you. This would be good for about 100 spins before the whole thing switches to manual. You do need to pay attention when triggering the autoplay though because of the lack of audio.

Also, you can also choose to gamble if you think that the slot is slow in giving you the rewards. As with Merkur Gaming titles, you can gamble on a card game or the ladder game. You can win as much as $140 on each sub-game.

Golden Rocket slot machine seems like a simple enough game, consistent with the titles under the German software firm. There's a nice surprise, however, when you get three more rocket scatters which will trigger multiple-spin action on the reels. You might just get lucky and win big.