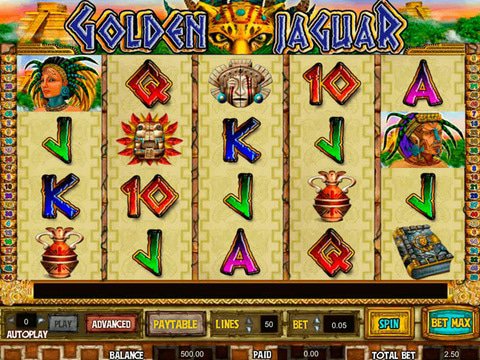 Just imagine - stumbling into a mysterious and never-before discovered island with your crew in search for treasures and creatures that will bag you some gold all with the thought that you're scouring an uninhabited place, only to find out that you're completely wrong. Though quite scary, it's simply an invigorating concept and it pertains perfectly to Amaya Software and its game, the Golden Jaguar Slot Machine. Jaguars, part of the big cat family, is one that's experiencing serious decrease in their population and though it's just one the things you'll have to worry on top of the island, it's also apparently one of the most valuable. To help you sort things out before you place any real money on the game, it is better for you to engage on the no download Golden Jaguar free play slot demo in this page. No registration is required so you could study the island free from both hassles and risks.

An Island Veiled With Mystery

Canadian gamblers could never get enough of this kind of game that provides mystery, action and adventure all at the same time. Not to mention, searching for such a wild creature adds up to the mix, making it a great game that any wager simply wouldn't be able to resist. As mentioned earlier, the jaguar is just one of things you'll have to think of because on the island, uninhabited is the last world you'd describe it with. There's a tribe on this island that you certainly have to be wary of, but sighting them would give you massive rewards to relish. There are card icons in this 5-reel and 50-payline game along with various artifacts and relics from ancient vases, unrivaled tomes, tribal statues, tribesmen and women, the Golden Jaguar and the game's bonus symbol. The game's bonus symbol is one of the best things you'll encounter on the game as three or more of them could grant you free spins that can possibly rain you with massive wins. The Golden Jaguar maintains its wildness in this jungle as it provides a capability to help you get combinations through its wild substituting prowess. The game may lack some other extra features, but the thrill of the experience is a great factor that keeps this game extremely invigorating and addicting.

Though the gender of the jaguar in the Golden Jaguar Slot Machine isn't mentioned, there's no doubt you'll have little problem identifying the gender of the principal character in Jaguar Princess slot from IGT. This similarly themed game comes with a 5-reel and 50-payline structure as well while it exhibits a beautiful and intensely compelling environment that will bewilder any wager who lays their eyes on the forest and its creatures. The drawback however, is that it comes with a measly jackpot of $250 which may be far from being attractive even to some low-rollers.

With the invigorating and rewarding experience that can be derived from the island of the Golden Jaguar Slot Machine, it is only right to pair it up with a good site such as the Cresus Casino. This will allow you to exhibit your potential with 20 free spins bonus and 100% match-up to revel on. Loyalty and VIP programs are also established with a multi-software structure with a massive library of games.