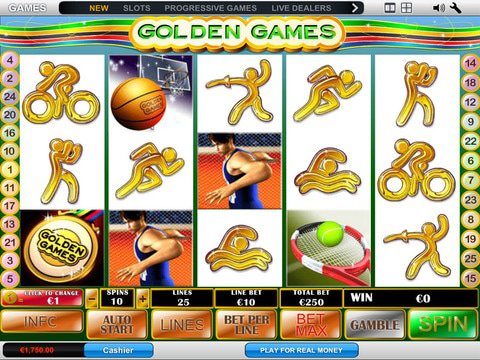 Whether you consider yourself quite the avid sports fan or even if you just plainly love waging games themed after adrenaline-inducing sport games, then you're bound to be captivated and entranced with what the Golden Games Slot Machine could offer. This game is developed by Playtech Software and it definitely befits the astounding reputation and glorious stand of the software in the industry. The game is infused with a 3D setup that makes it even more phenomenal while its grand prize is certainly something any wager would want to get their hands on. Play the game and see if you can strive to get on the top through this Golden Games Free play slot demo. You can review the game easily and immediately, to see for yourself if it could be just what you're looking for.

It's definitely an understatement to call this game fancy as it comes with a downright vivid and scintillating atmosphere that will surely brighten up anyone's day. Its 3D graphics embodied on its symbols just goes to show just how advanced and innovative its visual appearance is, and that is coupled with its intuitive display with a neatly-packed control at the bottom. You can easily manipulate the features of this 5-reel and 25-payline game with bets that could go from €0.01 up to a whopping €250 per spin. This shows just how versatile the game is and how accommodating it is for both low and high rollers. The stick figures with different kind of sports are the low paying symbols of the game while you'll be able to see weights, basketball, racket and a timer as one of the higher paying symbols. The scatter of the game is the 3D sports man with a capability to double the upper limit up to a staggering €1000. The bonus symbol is the astounding Olympic flame with capability to bring forth multipliers and free spin. Finally, the wilds of the game is the symbol of the game which is also the highest paying symbol with the substitution capability for easier completion of winning combinations. If you're feeling lucky, you could face a double-or-nothing risk feature with the gamble option that may just be what you need to step up your game.

If you want to play yet another perspiring waging game of sports that's highly similar to what the Golden Games Slot Machine brings forth to the table, then the Olympic Slots from SkillonNet is certainly your way to go. It runs with a 5-reel and 20-payline matrix which is only slightly different from what the Golden Games offer, while its jackpot prize can reach up to a staggering $20,000 prize. Prepare yourself as well as the game has an incredibly payout rate and its special symbols from wilds, scatters and more will surely help you win easier.

There is no place better to play the Golden Games Slot Machine, other than a Playtech Casino that hosts sublime arrays of slots. We suggest that players take the time to play the game at Slots Heaven Casino and see just how it could greatly affect your experience. Grab lots of winnings from the start with a whopping 200% match-up for a max of $400. The site is also highly available with mobile, download and flash-play versions to boot.