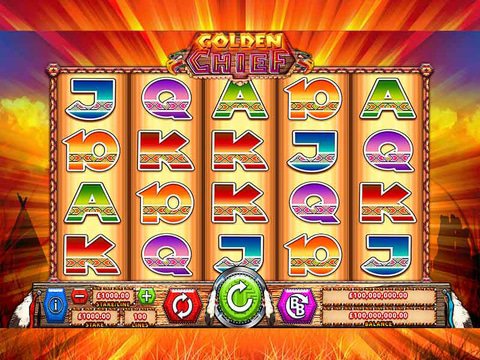 Meet the native tribe and they may reward exciting prizes for the players. Never miss the chance to bump into the chief of the tribe by playing the Golden Chief slot machine. No download is needed to meet this tough man and it is free to play the demo version of the game. Get a glimpse on the Native American culture and review the features of the game.

Upon accessing the game, players will instantly be transported into an Indian village where they can see totem pole, Indian girl, and a grizzly bear. Behind the reels, a tent and some creatures are displayed. They are set against a captivating sunset. The overall design of the game can give players an authentic ambiance of what the tribe possesses.

The game is developed by Barcrest software, which gave their best in conceptualizing the game. Aside from stunning graphics, the Golden Chief is notably full of exciting features. There are 5 reels in the game landing on 4 rows.

Matching similar symbols is not the only way to win the game. Players must watch out for the scatter symbol represented by two stone blade axes and wild icons. At least 3 scatter symbols can trigger one of the three bonus games of Golden Chief slot machine. The Cash Canyon Feature lets players collect multipliers, the Totem Riches that allows players to pick items with corresponding prize, and lastly is the free spin that can go up to 10 times.

Native Americans on the Move

Indian Dreaming slot machine is another game holding the theme of the colorful culture of Native American. This game developed by Aristocrat has 5 reels and 243 ways to win. It is the ideal option for players who prefer higher number of pay lines compared to the 20 pay lines of Golden Chief.

Drueck Glueck Casino allows Canadian players to experience Golden Chief free play slot with no registration needed. The popularity of the gaming site came from its generous offer of free spins and bonus rewards for both new and loyal players. The game can also be accessed using mobile gadgets running in different platforms.