God of Storms
Enjoyed playing this game?
Rate it → 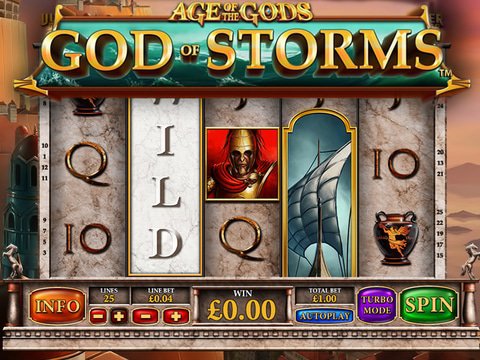 Raise your banner and draw your swords as you take action in one of the most thrilling and exciting newly-developed Fantasy game under the production of one of the leading developers in the industry, Playtech. All sorts of twists and turns have already been incorporated to fantasy games since time immemorial especially with one that tackles mythology like the God of Storms Slot machine from the aforementioned software. Though all odds may seem like it's against the brand and that the possibility of it not being unique is high, there's no doubt that in the end, you'll still be the one who'll end up being amazed and surprised. If you want to know more about what this statement means, venture off to the deepest parts of this realm of the Gods and learn more about the game in the No registration and no download God of Storms free play slot demo.

Conquer Wars and Dominate the Reels

The most common mythological points that are imbued on the reels lie at the Ancient Greece and this is exactly where the game takes place. At the back of the 5-reel and 25-payline matrix, lies a picturesque and mesmerizing view of a city. The details of the city are nothing short of exquisite and it is apparent just how much time and effort the developers have placed on the game to make it more immersive and jaw-dropping than its competition. The reels on the other hand, are simpler than what its background suggests and it's enough to emphasize that the game still values its rewarding side more than anything else. Whether you're a low or high roller, you'll also have plenty of room to enjoy the game at its utmost as the betting range can even peak up to £250 per spin. In this city, you should not be complacent as war is still going on and you'll see knights, assassins, archers, sea creatures and a dark vase around every corner. There are also lower symbols which includes card icons but what you really have to set your eyes on is the stacked ship wild. It comes with the power of the wild with the capability to help you win more frequently through its substituting prowess. If a stacked ship fills the whole reel, a Wild Wind Respin feature is triggered that will summon the God of Storms into battle. The God of Storms will blow away the ship one reel at a time until it gets off the reels. You'll also get a multiplier depending on the amount of blows he makes.

The God of Storms may be powerful but the Thor Slot Machine can definitely match it up. This game is based on the Thor movie and incorporates the fantastic world of Asgard in its 5-reel and 30-payline gameplay made by the same brand, Playtech. The game comes with whopping graphics and symbols along with lucrative and highly useful symbols to boot.

Make sure you're on full gear as you go to war with Gods in the God of Storms Slot machine by conquering it through Sports Interaction Casino. Revel on plenty of bonuses it offers regularly and a welcoming package that includes match-up deposits and more along with other advantages it has going on for its valued players.