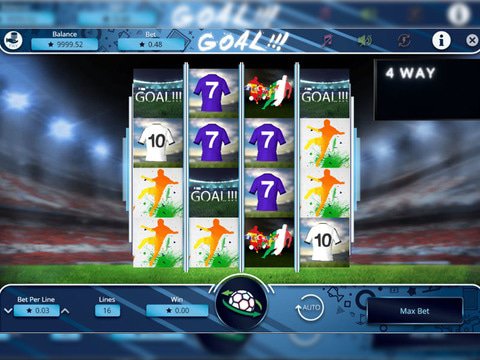 Developed and released to the public at the season of the European Cup on 2016, the intense arrival of the Goal!!! Slot Machine from Booming Games Software could never have been more perfect that it did. It was warmly welcomed with its timely released and what received more critical acclaims is its topnotch overall gameplay that definitely does justice in portraying this sports game that has been raved by countless individuals throughout the ages. If you want to know just what this game comes with that many players go crazy about, the Goal!!! Free play slot demo in this page is the perfect first path for you. No registration and no download is needed to partake on this demo and the best part is that no risk is involve, giving you the chance to experience the pure fun and invigorating experience promised by this illustrious game.

Though Soccer or Football comes with a low-scoring nature, it still remains one of the major sports across the globe that receives one of the most spine-chilling reverence. This stable base of fan is perfectly portrayed in the Goal!!! Slot Machine as you'll be welcomed with the never-ending and resounding cheers, echoing throughout the gigantic stadium. You'll surely feel the intense adrenaline and excitement lingering on the air the moment you enter the game as you'll see the controls of the game neatly packed at the bottom with information placed at the top of the screen. You can also see the payline through the button at the upper left corner along with other information on the game at the top bar. The game only comes with a 4-reel and 16-payline gameplay but, unlike other games, this game pays 4-ways which means that it doesn't just recognize winning combinations from left to right, but also vice versa, up and down. The max bet of the game could only reach up to 48 coins per spin, while symbols consists of a white 10 shirt, a 7 blue shirt, various positions of soccer players with tantalizing colors, the goal symbol, the trophy and the soccer ball. The trophy acts as the scatter of the game, giving players the chance to win more with its free spins effect. The wild on the other hand, is the soccer ball, capable of bringing up to 30,000 coins to the table and a substituting effect to lend a hand and make winning combinations a lot easier.

Soccer is truly a phenomenal game as portrayed in Goal!!! Slot Machine and another one that will prove this is the Soccer Safari Slot from Microgaming. It boasts a 5-reel and 30-payline matrix which features that soccer is also a famous and revered game even on the animal kingdom. The game is undeniably cute with highly detailed symbols that showcases the developer's supreme capabilities. The game's jackpot is about $8000, making it incredibly irresistible for wagers.

If you're geared up and ready to join the soccer team in Goal!!! Slot Machine, we suggest you to try it out via Tropezia Palace Casino. In this site, you'll experience high-end waging at its finest, drizzled with plethora of bonuses to boot. You'll be able to revel on a 100% match-up bonus, VIP club bonuses and other promotions to use.