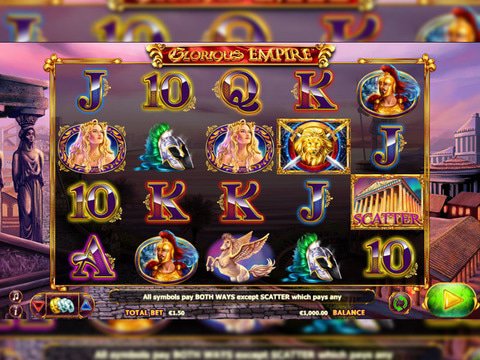 Out of all the time periods in the world, there's no doubt that the Roman Empire is the one that has become incredibly influential to what we know of today. In fact, there are even countless people out there who'd be incredibly thrilled to give this exemplary empire a look and if you wish so as well, you don't have to look further. NextGen Gaming has developed one of the most eye-catching Roman-themed game that's bound to give you hours and hours of gameplay, topped with rewarding experiences that will surely get you hooked to it for times to come - the Glorious Empire Slot Machine. Feel the glorious demeanor of the Roman Empire back in the days when it was still at its peak, through the reels provided in this dimension. Of course, a trip to Rome is something that will incur worries to anyone but with the no registration and no download Glorious Empire free play slot demo, there's nothing for you to worry about.

Rome in all its Glory

You would certainly not believe that you can go to Rome in a virtual trip that will cross not just distance but, time and space itself. It will bring back the ruins to its old, Golden Age wherein each section of the place is filled with brilliance. It is no understatement to say that the Glorious Empire Slot Machine, is by far one of the most tantalizing game in the market to the point where countless individuals may be helpless in front of it. All the Columns, statues, buildings, pavements and more, illuminated by the pristine sky of this Golden age will surely make your jaw drop and if that is not enough to convince you of its greatness, the 5-reel and 40-payline matrix at the center would surely seal the deal. The graphics are crafted to perfection wherein you'll see the majestic yet very imposing manner of the place in the high-quality symbols of the game. The game is truly cohesive from its design, intuitive control and interface along with its highly rewarding setup. In this age, you'll see not only outstanding card icons; there are silver warrior helmets, chariots, Pegasus, warrior clad in golden armor, a pristine princess, a renowned Roman establishment and of course, an insignia bearing the face of the lion. The scatter showcasing the Roman establishment comes with the capability to provide pay anywhere it lands, topped with bestowing free spins when you sow 3 to 5 of them. On the other hand, the lion insignia bears the responsibility of the Wild symbol to help you pave path to winning opportunities.

Experience the brilliance of the Roman empire with another game based on it, which is the Call of the Colosseum from NYX. It features an appealing setup with a 5-reel and 20-payline matrix while utilizing helpful features from scatter, free spins and gamble feature to make the game even more thrilling.

Revel on the Glorious Vibe of the Roman Empire in Glorious Empire Slot Machine through Slots Million Casino. With this site's help, you'll be able to maximize every spin through the help of its stellar software, topped with its gargantuan array of bonuses from free spins bonuses, loyalty bonuses, match-up deposits and beyond.