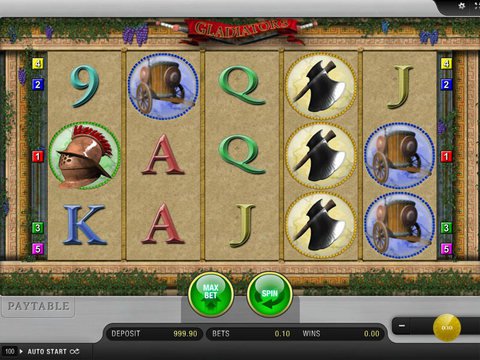 The Gladiators slot machine should not be confused with the Gladiator game. The former is created by Merkur Gaming while the latter is made by Playtech and based on the 2002 movie starring Russell Crowe. Both games, however, follows the exploits of the Roman slaves who were made to fight in the Colosseum. You can play the demo on LVBet Casino. You can play Gladiators slot machine and any game of the similar theme on the top Canadian website, LVBet. There are hundreds of titles listed on the site and every one of them are aptly rated and described so you will have an idea how others find the game. While that feature is convenient, you can also play the demo game to find out for yourself if it's the one for you.

During the time of the Roman Empire in the 1st Century BC, gladiators are considered as fierce warriors who were of the slave stock. They were forced to fight to the death either for freedom or for prestige. If they were not fighting other gladiators, they were also thrown into the pit against animals. The Gladiator Games were still peaking by the end of the 2nd Century AD before tapering off.

The symbols you will see here is what you would expect from ancient Rome. There's the emperor, a metal helmet, chariots, lions, and weapons and the card symbols, A, K, Q, 10 and 9. In terms of graphics, just don't expect too much out of this game. It's almost like the early days of casino slots, but the game is relatively new, which is weird.

This one has five reels and five pay lines. The bets range between $0.05 up to $10. There's no bonus game and there are no multipliers. There's also no scatter but there's a wild. However, the good news is that the game has a large variance, which means your small winnings have the capability to double or triple in a short period of time.

But the Merkur signature of card gamble and ladder gamble is also present in this game, which will at least give you the chance to increase your pot.

Gladiators slot machine from Merkur Gaming is a relatively simple game. It will appeal to those who are still new playing slots.

It's obvious that the Gladiators slot machine should be compared to the Gladiator game from Playtech, if only because they have the same theme. But Betsoft also has a game of its own with the title, Gladiator. This one has five reels and 30 pay lines. You can be as little as $0.02 for each pay line up until $1. For high rollers, they can bet as much as $5 per line and that earns them the right to win about $50,000 in the jackpot.