Ghost in the Shell

Ghost in the Shell
Enjoyed playing this game?
Rate it → 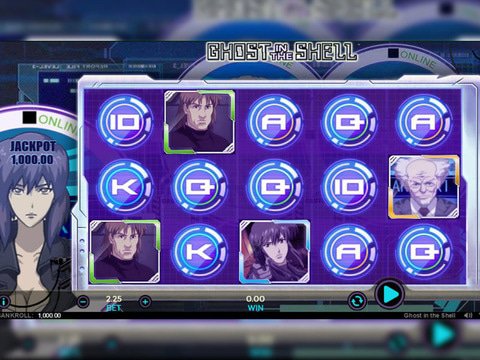 Ghost in the Shell

Ghost in the Shell Game Review

Before going famous all across the globe, even Anime had starting points that became the door for them to enter the International Scene. One of the most revered and renowned title you'll surely have heard of or even watched, is the Ghost in the Shell, written by the Legendary Artist, Masamune Shirow. This anime has been raved from North America, Canada and more, up until it became so popular that it paved the path for Anime's overall popularity. It has been adapted in different entertainment genres and nowadays even the stellar and esteemed 888 Holdings brought it to the reels in the form of the Ghost in the Shell Slot Machine. It shows an exemplary Sci-fi Endowment that will keep you on your tip-top condition whilst also making sure you'll be motivated enough with what it offers. Experience the game for yourself through the Ghost in the Shell free play slot no download demo in this page and learn everything about it before you play it with real money.

Comparing the game to innovative ones of today may not put it on high pedestal when it comes to its visuals, but there's no doubt that it contains everything you'd expect from Ghost in the Shell Slot Machine and its Anime. The backdrop of the game is also partly animated with Motoko Kusanagi, at the left side, occasionally distorting like interrupted signals. You'll feel nostalgia as you also see the symbols of the game that shows characters from the anime. There are also common card icons, but what you'll surely feel happy to see are Motoko, Batou, Daisuke, Tachikoma and Togusa. There's also the Wild and Wild X3 symbol which are both wilds, with the latter having a X3 Multiplier you'd surely crave to have. Another endearing feature of the game is its scatter symbol along with its "Pick Me" Special feature that could award you with amazing prizes. At the upper left of the game, you'll also see a jackpot prize that starts at 1000, but gradually increases the more you play as it is a progressive jackpot. With this game, you'll get a dose of your favorite anime all while having the chance to win bigger the more you play it.

Tragically, there's not much choices for anime-themed games in the gambling industry and aside from the Ghost in the Shell Slot Machine, you'll be hard-pressed to find another one. However, if what you want is another Sci-fi experience to mix up your experience, the Space Wars Slot Machine may just be your thing. It's developed by Net Entertainment and comes with a 5-reel and 40-payline matrix. It betting range could go up to $200 while only up to $5000 jackpot prize is up for grabs. Still, it makes use of innovative symbols to keep you entertained while bringing you high probability of winning.

The prizes up-for-grabs in Ghost in the Shell Slot Machine may already be extremely enticing for some, but there's simply nothing stopping you from increasing those odds a step higher. Play the game at 888 Casino and you'll certainly find yourself playing with ease and no worries. It comes with superb security and other features, while also boasting a supreme line of bonuses from free spins bonus, no deposits bonus and match-up bonuses.