Gems and Stones
Enjoyed playing this game?
Rate it → 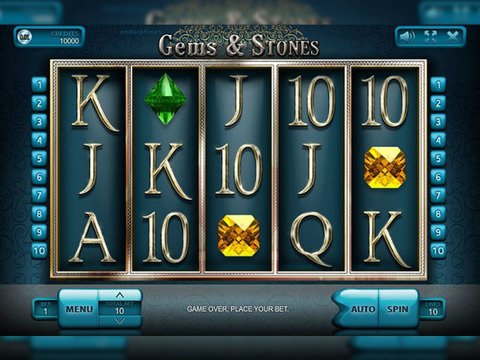 If you're a wager, then there's no doubt that you have a good eye and mind for what really is meant for there to be wealth. In fact, you may even be treated as a true connoisseur of wealth and if you are, you should also be aware that gems and stones aren't just things that woman should fancy, but are also something that many men should covet as more precious stones could very well be not any less than gold or even more precious things. Endorphina Software understands this sentiment very well as it aims to intrigue and pique the interest of all players - both men and women, on their classy and elegant play on the Gem and Stones Slot Machine. The name says everything you need to know about what the game's all about but what it truly offers can only be found out if you play it through the no download and no registration Gem and stones free play slot demo.

Endorphina Software have always been known for their topnotch and over-the-top innovative graphics and they once again prove others that their reputation is well deserved. The game will welcome you to a lobby full of sparkling, striking and vivid gems with graphics that truly depicts their unbridled beauty. The backdrop of the game is a classy and elegant play on dark colors with diamond patterns, creating a striking sophisticated appeal that any player would find very riveting. It emphasizes the beauty of the symbols on the 5-reel and 15-payline matrix with this dark yet elegant style. The game's control system is also laden with gems and stones, while betting range could go as far as €75 per spin. Still, the bigger the amount you risk, the more prizes you'll be able to garner. In the game, you'll find a familiar number among the gems - the number 7, which is also made from sparkling gems. There are also other bold gems such as sapphire, amethyst and ruby which all pay decent amount of prizes. The truly special gems in this game however, are the emerald and diamond as they are both infused with the power of the scatter and wild symbols, respectively. The emerald, like any other scatters, could grant free spins while the latter can be substituted for other symbols except for the scatters. On top of its wild powers, the diamond is also the 2500-coin jackpot gem of the game, making it the most coveted gem out of them all.

Net Entertainment also has a spectacular game in its library that showcases various gems in cosmic proportions rather than the elegant approach of the Gems and Stones Slot Machine - the Starburst slots. The game has but simple layout with a 5-reel and 10-payline structure. The payout also ticks at about $2500 which may not be the most attractive point of the game for high rollers. Still, the game provides surreal gaming experience that's more than enough to reel in dedicated players to its reels.

We recommend gamblers to play the Gems and Stones Slot Machine at Omni Slots Casino. This site is astoundingly reliable and available through mobile and instant-play versions. It also offers lucrative 100% match-up to $300, weekly tournaments and more benefits to take advantage of.