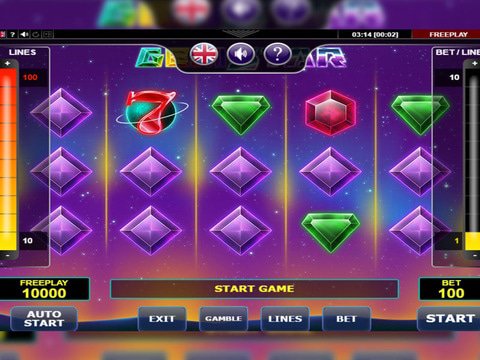 Indeed, it is hard to provide innovative gameplay despite retaining a straightforward mindset of gambling that inclines more to the classical side of the industry. However, the Amatic Software has managed to overcome trials and successfully built a not-so classic game that's filled with wonders and invigorating explorations through the galactic space and environment. The game I'm talking about is the Gem Star Slot Machine. This game's name makes it apparent that it's a combination of gems in a starry environment, but it is certainly more than what it makes itself to be. This game has become popular in Canada and other countries that would put one in an awed state of mind. Enjoy a scenic test review of the game without needing to risk any hard cold cash you have in your pockets by playing the no download Gem Star free play slot demo. Soar through space almost immediately as no registration is also required to taste the action of the game.

Though the game has already stated through its name that it's a fusion of Gem and Space theme, it also contains vivid and colorful symbols you'll see from fruit machine that makes the game a three-way themed game. You'll be able to experience the scintillating beauty of these three elements in one game, making it more than worthwhile to give the game a try right away. The game's background is a magical and aesthetically compelling space design sprinkled with twinkling stars. The reels come in a 5-reel and 100-payline composition, with a background that's transparent to further emphasize the beautifully settings of the game. The control system is a generic one from Amatic Software, but it's certainly helpful enough to provide more comprehensive manipulations to the game's settings. There are different types of gem in the game, with a bar and lucky seven symbol, showing the fusion of themes perfectly. A burst of colorful light serves as the Wild symbol of the game, equipped with the prowess to trigger re-spins. The Wild also has the basic power of Wild symbols like in any other game. Even though the special features and symbols of the game may be quite lacking, it is still fun and electrifying enough to push one to play with the game for hours.

A game that plays with gems and space is truly a unique one, but there's a few out there like the Gem Star Slot Machine that has set themselves apart from the crowd. Another which is extremely popular nowadays is the Starburst Slot Machine, developed by Net Entertainment with a 5-reel and 10-payline structure. The game is visually captivating and outstanding but more than that, it comes with over $2500 jackpot filled with special symbols to help you on your path to victory.

Traversing Space and picking up Gems may be quite a tolling task and with this, it is important that you have prepared every advantages that could very well help you in your endeavor. The team suggests players to spin the reels of the Gem Star Slot Machine at Mars Casino. The establishment provides more than lucrative offers from 50 free spins bonus to dollar-for-dollar deposit promotions, all while promising superior overall operations for worry-free experiences for users.