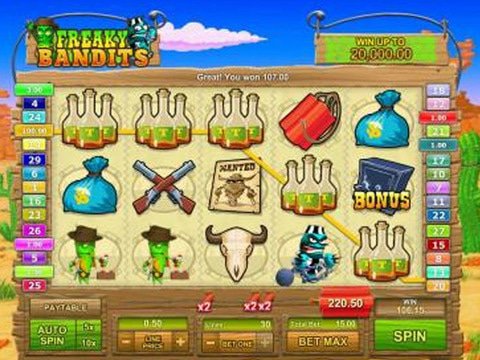 More often than not, reputable casinos have already experienced releasing a game that have gained popularity that far exceeded their expectation. This kind of games in turn, may become one of the trademarks of that company, earning sequels and alike to elongate its prestige and make it more invigorating, interesting and enticing. Games OS Software has that kind of sequel that has turned into an excellent trademark - the Freaky Series. One game in this series is the Freaky Bandits Slot Machin that's going to explain to you firsthand just why it's beloved by the brand's sea of players. Facing off bandits for the chance of gaining huge sum of money may be quite dangerous so to test the waters first, it is recommended that you play the game through the no registration and no download Freaky Bandits Slot Machine in this page first.

Encounter with Bandit Critters on the Desert

Despite the game having a fun vibe and an ultimately exciting atmosphere, there's still every reason for you to get freaked out at first with the faces of the critters in the game along with the blinking cactuses at the background. You'll be presented by Games OS Software to a vast barren desert which stretches as far as you could see with cactuses and occasional grasses popping about the place. Red rock formations and the vast sky can also be seen from afar and at the center lies a wooden board containing the 5-reel and 30-payline matrix of the game. The setup of the game will surely be oddly familiar to you already as it makes use of a generic yet intricate control system known from the brand. As expected, the game's limit only ticks at 60 coins per spin and denominations are only either 1 or 2 coins per line. Inspecting the pay table of the game at the side, you'll see every information about the symbols you'd have to know along with the rules and regulations if you have to double check it. You'll encounter saloon, dynamites, bandits, prisoners, cowboy, a bag of cash, shotguns, liquor, a bone head and a wanted sign of the bandit. The bandit is of course, the 5000-coin jackpot holder of the game. The Saloon and the dynamite are slightly more special with their roles that enables them to give out free spins and multipliers, respectively. The game also has its unbridled bonus game, which can be triggered by the locker bonus symbol.

If you're looking for a classic western slot machine with less freakiness compared to the Freaky Bandits Slot Machine, the Bandit's Bounty Slots from RTG is something you'd love to have on aboard your list. It comes with a 5-reel and 25-payline structure with a classic-looking reels and simple graphical symbols. The controls are also simple and straightforward while the game promises that it can bring forth up to $7500 cash prize for the truly lucky ones.

Get the chance to maximize your gaming experience in playing the Freaky Bandits Slot Machine by accepting our suggestion and playing the game at 888 Casino. With this site, you'll have nothing to worry about in terms of security with its high-level encryption, while you'll also be able to swim on oceans of bonuses to keep your playing more.