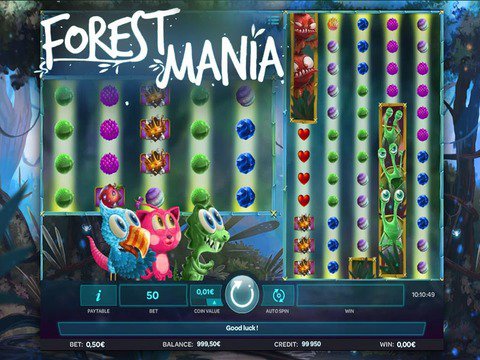 You may not notice it the first time around but there's no doubt that sooner or later, while playing the Forest Mania Slot Machine developed by iSoftbet, you'll realize that crazy is way an understatement to describe this game as it undeniably lives up to its name with its qualities that borderlines madness. With its riveting and endearing qualities, the game banishes away everything you know of from slots as it presents to you a whole new world of possible, a new door with sets of features that you may not have seen from other games before. Whether you're a professional or just a newbie to this world, you don't have to fear anything because this game creates an equal ground of opportunities for players to duke it all out for a chance to win grand prizes. This game has become indelibly popular with Canadian masses and if you're still not convinced, the no registration and no download Forest Mania Free play slot demo is here to help you.

Lunacy at its Finest

There's no doubt that the first things that'll pop on your mind as you enter the visually compelling world of Forest Mania, is a question that will point out the insane setup of the game. If a regular game comes with a single set of reels, this game will provide you with two set of reels - both possessing 5 reels with one having 4 rows and the other having 12 rows. At the side of the screen you'll see cute, but freakish critters that seems to be getting more insane by the second as they look into the reels longer. The game comes with 100 fixed ways to win that will give you plenty of winning opportunities. It also makes use of various cute and compact symbols that may not seem anything special at first, but are all created with high attention to detail. There are various odd balls of symbols with different designs, a heart and a whole lot more that simply can't be explained in mere words alone. Free spins and another feature of the game called Wild Reels are also triggered randomly, which further supports the lunacy of the game. There's also the Wild symbol that would provide more help during free spins rounds, making them incredibly important to your path in dominating this hysteric forest.

With the emergence of the Forest Mania Slot Machine, it has been proven that even the Forest-themed games could be taken in extremely different ways with the sky as the limit to the imagination of developers. Another game with forest theme but with a completely different perspective to Forest mania is the Forest Wonders Slot Machine from Playtech with a 5-reel and 25-payline matrix. It's a game harnessing the story of Alice but here, you don't have to be Alice to win astronomical amounts of money that could even be the stellar 5000-coin jackpot of the game.

We suggest players to give this game a try and enjoy it via one of iSoftbet's most renowned casino, the Sports Interaction Casino. It's available via all means from instant, download and mobile version while welcoming players with 100% match-up to 100 bucks. There's also a lot more bonuses from reloads bonuses, rollover bonuses, a lucrative comp point system and more.