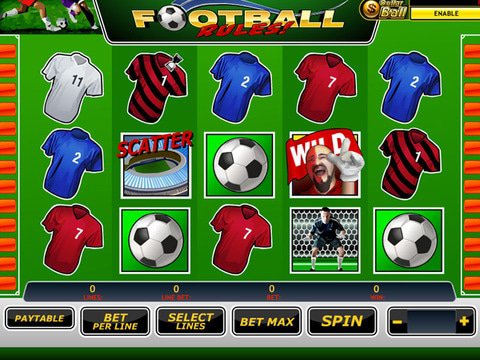 There may be lots of slots with football as their theme, but the Football Rules Slot Machine gets an advantage in simplicity. The modest design lets you strategize well and focus on the game itself. See how Playtech crafted this simple game by playing its free demo version on this page. Nothing to lose as there is no download required to play the game right here.

When it comes to a football-themed gaming machine, you can see a stadium, hear the cheering crowd, and witness the cool animations of the football-related symbols. However, Football Rules resisted using those fancy features. Instead, it tries to deliver the football right on your screen with a minimalist approach.

Background music is not a priority of this game. Unlike other games with consistent melody playing on standby, this machine keeps a silent mode while waiting for you to spin. You will only hear the game's sound effect upon spinning on the reels and showing the combination.

The interface design shows alternating shades of green, probably signifying the color of the football field. Navigational buttons are equally placed at the bottom part of the screen. Symbols are as unpretentious as the top uniforms of the football players in different colors.

When you match five plain uniforms in a kind, you will be rewarded with up to 200 coins. The ones with stripes can pay up to 300. Aside from the uniforms, other symbols include a ball, a referee, and a player. These icons when matched can provide you cash from 20 to a maximum of 1,000.

There are five reels within the game and 25 pay lines to choose from. You can effortlessly modify the number of pay lines and the wager value to match you preference.

Eyes on the Goal

Always keep an eye on the wild, scatter, and bonus symbols because these icons can offer huge prizes. First, if you are able to get five wilds in one spin, you will receive 10,000 coins. Meanwhile, three to five scatter symbols can give you up to 50 coins plus multipliers for your existing bet.

When the bonus symbols hit reels 1 and 5, you will get the chance to have additional free game. This round lets you pick some balls. Each of them has a corresponding amount that will serve as your reward.

Another exciting part of the game is the Dollar Ball Progressive Jackpot. This option is not activated by default. You have to enable it and choose five numbers. During every spin, a number will be drawn. If it matches your selection, the prize will be added on top of your existing balance.

We recommend you to play Football Rules Slot Machine on the Slots Million Casino, a top casino that allows Canadian players on the site. If you want more ways to win and a football game with animated version, maybe you can consider playing Endorphina's Football Game that has 43 free games for grab.