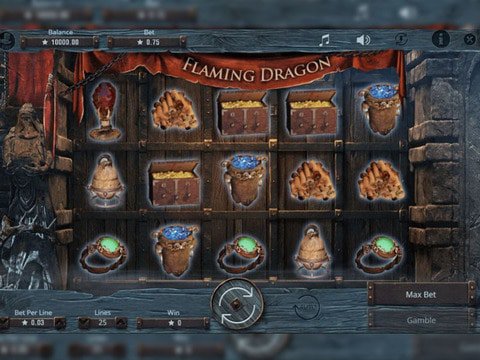 What makes the slot industry more intriguing than other online waging games, is how flexible and free developers are in creating marvelous games with different twists and turns. Even the almighty theme reigned by dragons in a medieval timeline could be taken in a funny and colorful way, but there's still no doubt that many would agree that medieval period with dragons presented in a realistic and fearsome way still takes the trophy. The Flaming Dragon Slot Machine is a Booming Games Software creation that's centered around the Medieval timeline, representing the almighty mythical creature known as the dragon, in a supreme and visually compelling graphics. All about this game will surely send chill down your spine whether it be due to fear or excitement. If you want to know more about it but you're afraid to risk your money on this dangerous journey, the no registration and no download Flaming Dragon free play slot demo is a great place to start with.

Battling the Mighty Dragon for Treasures

Aside from being mighty and powerful creatures with high longevity, Dragons are also accompanied with high intelligence that's far beyond human capabilities. Though the dragon in the game seems drastically filled with killing intent and malice, you'll still have a chance to gain his treasures if you get lucky and find the appropriate elements to open the doors to his vault of treasures. Each spin would cost you, but the more fancy your risks are, the more prizes you'd stand to win in this 5-reel and 25-payline game. Taking a step back and looking further into the picturesque scene of the game, your breath will surely be taken away by the ancient-looking stones, gate and statues that have been ravaged by time while the audio adds to the grandeur of the settings as you spin. If you spin at the max 75 coin spin of the game, the silver chalice of the game pays the highest with a 45,000-coin jackpot and wild capability to help you achieve winning combinations easier. It's followed by a mystical egg-like item, and a red ore which harbors the power of the scatter symbol that could pay anywhere and grant free spins to fated players. There are also treasure chests in the game that's valued lower than the previous items, crystal-filled baskets, ring and piles of logs.

The Flaming Dragon Slot Machine will surely take you beyond what other simple dragon games could take you to but if you want to try other games on the same genre, feel free to do so as well. In fact, we also commend playing the 5 Dragons Slot from Aristocrat. It's built with a 5-reel and 25-payline matrix, paired up with a betting range that could go up to 60 coins per spin. It's imbued with an orient appeal for a different path than Flaming Dragon, while you'll see golden ornaments, coins and symbols throughout its 5-reel and 25-payline structure.

A reliable site is needed if you want to traverse the medieval lands of the Flaming Dragon Slot Machine and we highly recommend players to spin the reels of the game through the Tropezia Palace Casino. This site will give you more than what you've bargained for through their 100% match-up bonus, VIP Club, Continuously-updated bonuses and more.