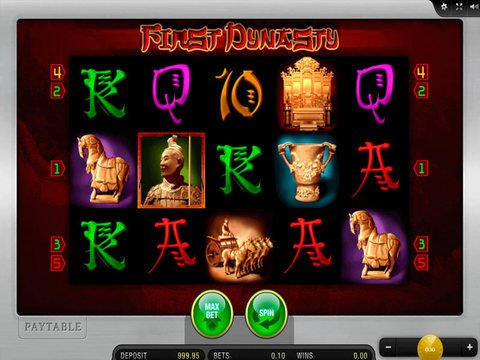 You find yourself in ancient China. There's a powerful emperor bent on conquering the world. It's now your job to help brave warriors to overthrow the Chinese ruler. You can play a demo of First Dynasty, brought to you by Merkur Gaming, and see if you like it before deciding if you want to play for real money. You can play First Dynasty on the top Canadian gambling site, LVBet Casino. What's good about this site is all the games are laid out for you to just choose and play. There's no download and no registration needed. But signing up with the website will entitle you to a no deposit bonus that can reach as much as $1,000. There's really no investment on your part, it's all good fun when you try out all the online slots.

Just like the name of the First Dynasty slot machine, you are going to go back to the First Dynasty in China, which is widely believed to be the Xia Dynasty or what is known as the Bronze Age of that part of the world. This was the time when clans were fighting each other for dominance and control of resources.

This game is quite simple. You have five reels and five pay lines. You bet from $0.05 up to $10. That gives you a lot of room to play around with your bets. Did we say this game is simple? You select the amount and then spin. That's it.

The symbols include a golden horse statue, a golden Emperor and the card symbols such as J, A, Q, K and 10, designed to mimic Chinese characters. Despite its simple gameplay, the graphics are surprisingly impressive.

There's plenty to win when you get the right combinations of the card symbols, but you would really like to see the wilds like the golden horse, the vase, golden throne and the terra cotta. They don't appear frequently but when they do, you might walk out with a lot of money. You can also look forward to the free spins.

First Dynasty slot machine is a good introductory game if you are new to the online casino game. There's enough reward in this game to keep it interesting.

The mysteries of China is always a good theme for online casinos, not least because there are over a million Chinese out there. First Dynasty slot machine is the same as a way to appeal to the Chinese market. However, if you want a taste of China then consider a game about one of its most famous sons--Bruce Lee. This is not exactly a new title since this was introduced back in 2011, Bruce Lee has five reels and 60 pay lines. You can also wager between a cent and up to $60 so it will appeal to the budget-conscious as well as the high-roller.