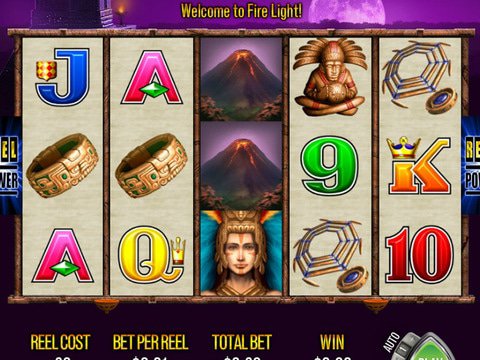 Holding one of the most impressive gameplay in the line of Aristocrat Technology Slots with a mysterious theme, the Firelight Slot Machine is undeniably an amazing game that has truly etched itself in the history of the waging industry. In fact, it has become completely popular in both web-based waging establishments and brick and mortar casinos alike. This reputation and grandeur alone is enough to make it apparent just how exquisite and stupendous this game has become. Imbued with a bit of tribal essence in its theme, Firelight has continuously reeled in players from left to right non-stop and if you want to review it yourself, the demo Firelight Free slot play in this page is your chance. No download and no registration is actually required to play this demo, giving you instant access to this outstanding game that has swept across the waging industry for years and years already.

The game runs with a structure of 5-reel and 243 pay lines with a pristine purple background that truly compliments the symbols and the mysterious tribal theme of the game. Accompanying this outstanding background are superb symbols from a tribal warrior's face, a drum, idol, ring, phoenix and even a lava symbol. Out of these symbols are two most important ones which includes the phoenix and the lava. The lava represents the wild symbol of the game, which just like in any other game, can be used to substitute for winning combinations. However, it still won't be able to substitute for a phoenix symbol that stands for the scatter symbol of the game. Another noteworthy aspect of the lava symbol is that it can trigger multipliers the more you have them on your reels. The scatter symbol on the other hand, will allow a player to enter the entertaining and unique free spin round, with a boost of winning chances by providing fixed winning symbols in the first two reels. With its completely mesmerizing vibe and stellar payouts, it is no wonder why this game has become so famous in the passage of time.

When you look at the mysterious theme of the game, there's no doubt that you'll compare it to Indian-themed games with its tribal-infused symbols. If you're looking for another game that has the same set of theme as this one, but with a different flavor, the Golden India Slots will surely be a great game to start with. The game is developed by GameOS and though it's not that famous, it is still greatly acclaimed by numerous players. Its 5-reel and 25 Payline gameplay vastly differs from the 243 payline of the Firelight as well and it also has a noticeably lower jackpot prize that may not be that attractive to high-rollers.

Whether you're from Australia, Europe or Canada, you could try playing the Firelight Slot Machine in the popular EU Casino. This casino boasts 30 free spins bonus for its newly joined players, topped with an astounding promotion that will match-up your initial deposit, dollar for dollar up to $100. It is available for players in both mobile and download version that makes it an even more enticing choice. Also, even though it doesn't possess a no deposit promotion, its regular additions in its line of bonuses will surely more than make up for it.