Fire of Egypt
Enjoyed playing this game?
Rate it → 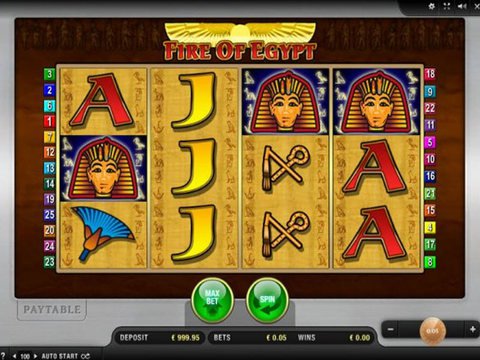 Another interesting Egyptian-themed game from gaming giant Merkur, Fire of Egypt gives you a dazzling look at the iconic figures that represent the ancient civilization. The game not only gives you a glimpse of the past but can also present you with the riches found in the kingdom. Fire of Egypt is a great slot machine game that offers big prizes. If you want to try a game with no download and no deposit, a free demo can be found on this page Merkur Gaming.

The game is rather standard of a Merkur game with a simple yet charming design of the Egyptian murals. The reels look like something from a pyramid's wall with hieroglyphs lined at the background. Even the cards look as if they've been carved on the walls which make it appealing to a player.

This 5 reel, 3 rows slot game has 25 possible pay lines with an interesting catch of finding the lost treasures of the Pharaohs. The mystic symbols have to be matched with the pay lines to create a winning combination that rewards your spin with coins. Each bet can be placed on a particular spin and can amount to 0.05 coins and a maximum of 10 coins. A "Max Bet" option is available for easy access and convenient gameplay.

The symbols are also created with bold letters and vivid colors of green and yellow that make you think of the hot deserts of Egypt. Symbols used in the game are the typical deck of card which is low paying symbols. Queen Nefertiti and King Tut are among the high paying symbols and some other cultural emblems from the Egyptian world.

Landing 4x King Tut on a reel will give you an astounding 2,000 coins and getting a 4x Queen Nefertiti will award you with 600. Multipliers are also sizeable and can double your cash prizes for landing a multiplier on the reels which will give you a staggering 200x your initial bet.

Merkur is known for creating slots with in-game bonus rounds called a ladder gamble game for each winning you have. They've created an in-game bonus where you get a chance to double your earnings simply by guessing the next color of the card among the series presented.

The Desert Kingdom, a game developed by another gaming giant Genesis has the same theme and similar pay line. Both games use symbols that take you back to ancient Egypt and amass their riches with each reel combination. Both of the games have a possible 25 winning pay line which is quite good enough for a decent slot game.

LVBet Casino is a good site for Canadian gamers who would like to escape to the sub-Saharan desert and experience the splendor of ancient Egypt. They have great signup bonuses which can be good for an inexperienced gamer as it can add to your credits and provide you with hours of fun. The Fire of Egypt is a good starting game with a decent gameplay and decent rewards.