Fire and Steel
Enjoyed playing this game?
Rate it → 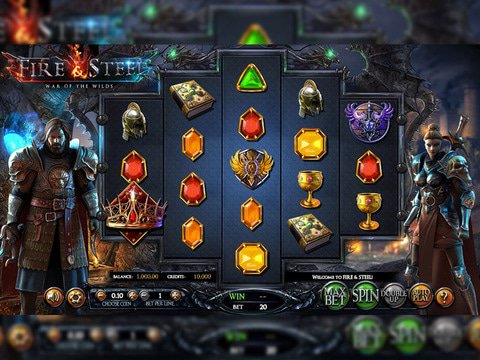 The Medieval period embellished with the grandeur of Magic has brought forth innovations on the Fantasy Category. As stories between varieties of races facing dreaded creatures like the Dark Lord, powerful Dragons and more, became even more prevalent, it is not surprising that even the esteemed online gambling industry has turned their faces and looked on the direction of this amazing category that's continuously thriving all across diverse forms of media even until today. The Betsoft Company is one of the leading software developer in the industry and as such, there's much to expect from its Fire and Steel Slot Machine which is borne from the Fantasy-Medieval Category. This kind of pedigree is something that'll interest any avid wager and if you're one of them, feel free to test out the waters of this game with the no registration and no download Fire and Steel free play slot demo located in this exact page.

Hegemony Across all the Realms

Without a doubt, the game exudes a sense of valor, pride and honor like no other game can and on top of that, it evidently reeks of magical scents, which is visible across the vibe of the whole game dimension. The Fire and Steel Slot Machine will surely provide you with a first impression that will imprint itself firmly on your memory as two 3D-like warriors face your screen. The overall graphics itself is nothing short of what you'd expect from a high-quality movie but, it's truly a shock coming from a slot game. The details are impeccable and not to mention, that's just the background alone. Looking at the game's control will make it apparent that the developers have geared it to be as impeccably intuitive as possible while at the center lies a rather unique layout of reels that you may have seen before but, is definitely far from being common. The game has a 5-reel and 20-payline setup, wherein you can customize betting conditions up to 100 coins per spin. The first two characters on the screen are of course, part of the symbols as well which refers to the swordsman and the shield maiden. The two comes with the power to turn symbols wild, with the former capable of turning symbols on top and below of it into wilds and the latter equipped with the capability to turn symbols at its side into glorious wilds. Other symbols of the game will surely feel in the minute details that will complete the game such as the dagger, helmets, golden goblets, book of magic, different insignias and more differently-colored jewels, each with their own equivalent prizes to boot.

The Fire and Steel Slot Machine is a true Scion of the Fantasy-medieval category but other than it, there is also Merlin Millions from NextGen. It utilizes 3D graphics capability, packed in a 5-reel and 50-payline structure. You'll stand a chance to win great prizes in this game and through its features, frequent pays are not impossible.

Reign supreme in playing the Fire and Steel Slot Machine by spinning its reels in Sports Interaction Casino. Boasting one of the biggest array of games and highest-quality software, the site also offers the widest array of promotions for you to exploit, which will surely increase your winning chances to grand heights.