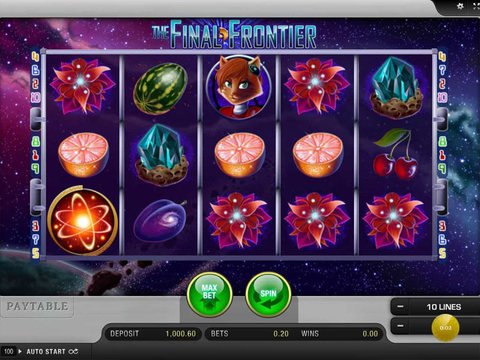 Deep space has always been an intriguing idea for anyone who likes to venture into the unknown. Final Frontier is an interesting quest with heroic characters united in the search for prizes from the far-out world. It is a fun and entertaining game with plenty of artistic taste and vibrant characters that will take you on an exciting adventure. Try the demo version of the game on this page Merkur Gaming with no download and no registration required.

Final Frontier is a 5 reel, a 3-row slot with 10 possible pay lines which will take you on a ride to the edge of space with fun and excitement. This new game developed by Merkur possesses something different from their lineup making the slot more intriguing.

What makes the game unusual from their line is the fact that developers focused on delivering a good aesthetics to players. The game is loaded with stimulating visuals and attractive features making you stick to every gameplay. The symbols are vividly created and the characters are stunningly gorgeous from every angle.

Symbols used for the game are the crystal, a flower, a lady crewmember, and some delectable and appetizing fruits. The game is presented with some unexpected characters like a lion who acts as the captain of the ship, a graceful cat who is the captain's first mate, and a bird who is the first class pilot.

Wild symbol is represented by the captain which can give you a payout of as much as 2,500 coins. It is also the most highly valued symbol in the game followed by the galaxy symbol which is used as the scatter.

There are only two adjustable buttons on the game which is typical of a Merkur game. One can be used to adjust the betting price and one used to determine the number of active pay lines. Bets can be anywhere from .01 coins to 100 coins.

Final Frontier had some decent bonuses when hitting the right symbol combinations. Among what you can expect from the game is getting a galaxy symbol on your winning combination will award you with 5 extra bonus spins and increase your multipliers. And landing 5 galaxies on your reels can activate 10 free spins to increase your chances of hitting the jackpot.

A space adventure game is one of the sought after themes for slots. It gives every player the excitement of venturing into the unknown which is similar to the nature of this luck-based game. A similarly themed game is Cosmic Quest developed by Rival but lacks the graphical aesthetics of the previous game. Both games though has the same number of reels and both games present their characters in the form of animals.

Canadians can enjoy these games in LVBet Casino which is one of the best online gambling sites to visit. They have tons of reward for new gamers including a huge signup bonus and free gifts to add to your hours of fun.