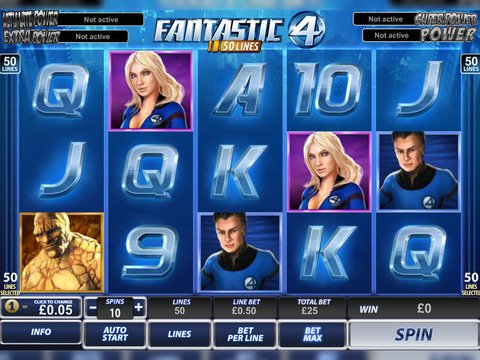 Similar with the other Marvel Comics stories, Fantastic Four has been brought to the gaming world. Thanks to Playtech Software for being the mastermind behind this amazing slot game. The same software company has already created a version of this game with only 20 lines available. After some time, they have released a better version of the game containing 50 lines to play with. The increased number of pay lines enables players to have a diverse wagering options.

In terms of design, this game is very straightforward. There is nothing much to display in the screen aside from the different shades of blue, which is the basic color of the group. The necessary buttons like the Auto Play, Bet Max, and Info options are organized at the most bottom part for easy navigation.

Fantastic Four 50 Lines Slot Machine has five reels. The members of the group "" Mr. Fantastic, The Human Torch, The Invisible Woman, and The Thing "" are the main symbols featured in the game. Additional symbols include the common card values (J, Q, K, A, 9, and 10).

Players from Canada are welcomed to enjoy this game. The Fantastic Four 50 Lines free play slot can be accessed without registration. If you cannot get enough of the game, you can also play it wherever you go because the game is compatible with most mobile devices.

A regular match of three or more identical images of the Fantastic Four members lets you gain a minimum of 25 coins up to 2,000 coins.

To raise the bar of rewards, aim for the wild and scatter symbols. Wild symbol, when matched two to five icons, pays you with 40 up to a whopping 10,000. In addition, the wild symbol can be a replacement for all the symbols except for the scatter. Scatter symbol, on the other hand, can multiply your money up to five times and it will lead you to free games.

During the bonus round, you can choose between the four members to power up your play. Mr. Fantastic possesses the expanding wild power, Invisible Woman grows your bet multiplier, Human Torch can be used anywhere in the screen, and The Thing shares the freezing wild power. It is up to you who to pick from these. Make sure to utilize their powers to strategize and take home huge cash.

Another Group of Superheroes

For a more conservative game where you want to play with 20 lines only, you can check out Playtech's The Avengers Slot Machine, which is also a pool of superheroes from Marvel Comics. Fewer pay lines are available, but both have almost the same features and rewards.

We suggest you try the Fantastic Four 50 Lines Slot Machine in the Slots Millions Casino, one of the prominent kinds in the industry. This site ensures a fair and profitable game for you.