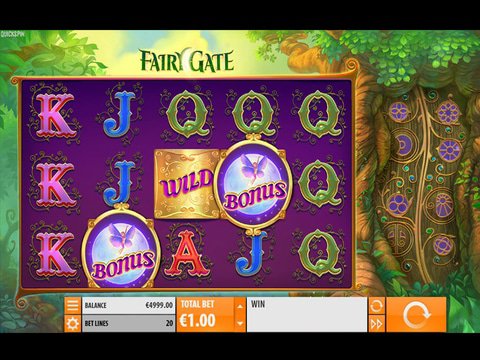 Enter the gate to the magical world and win some rewards by playing the Fairy Gate slot machine. A free demo version on this page is available for players to see a glimpse of this enchanted game. No download is needed to play the trial game. Be amazed by the magic of this gate and review the game here.

Quickspin software is the gaming developer behind this dreamlike machine. The interface of the game is so mystic, following the theme of this slot. Details of each symbol are so intricate and amazing. The gate going to the fairy land is placed in a huge tree. Players will surely be entertained with the magical animation of the game while spinning the reels.

There are 5 reels in the Fairy Gate slot machine. This 5 x 3 grid let the players place their bets on the 20 available pay lines. Player's bet on each line can be adjusted based on their preference. For as low as 0.20 coin, players can already meet the fairies of the game. High rollers may increase their bet up to 100 coins on a single spin.

Gifts from the Fairy Gate Slot

Different kinds of fairies are guarding the gate. They are in various colors as they can be in red, blue, or green. The faces of these colorful fairies are used as the symbols in the game. Aside from them, players will also see the common card symbols such as J, Q, K, and A. Players simply need to match three or more similar icons on the same pay line in order to win a prize.

A wild symbol can replace the other icons to make a winning pattern. The game also has a Fairy Wild Re-spin that triggers two extra reels where fairy orbs can appear. The extra reels are placed beside the original 5 reels. Number of fairies living inside the orb will determine the number of extra wilds to be awarded.

Aside from the wild symbol and the Fairy Wild Re-spin, Fairy Gate slot machine has a Bonus Scatter. At least three bonus scatter symbols can reward players up to 10 free spins. The free spins will give the players a chance to earn more winnings.

Players who are looking for a machine where they can bet higher may opt for Goldwyn's Fairies slot machine. The magical vibes of Goldwyn allow players to bet up to 250 coins, unlike the Fairy Gate that has a maximum of 100 coins per bet only. Regardless of the betting range, both games display a cool and enchanting graphics to enjoy.

Canadian players are encouraged to play Fairy Gate free play slot in Slots Million Casino because of its generous free spins and bonus. There is no registration needed to review the game on this casino. The gaming site is also mobile friendly that allows players to access the game using different mobile devices such as Android, tablet, iPhone, or iPads.