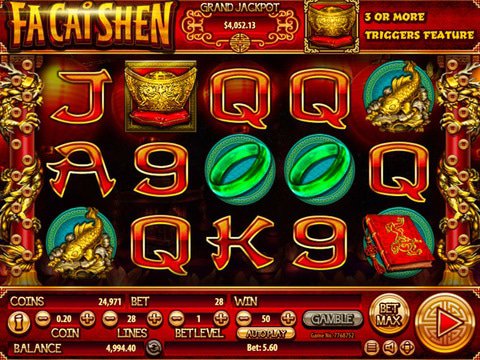 Chinese people places their Gods, Cultures and Traditions in a higher platform more than anything else and one of the gods they hold in most reverence is Fa Cai Shen. Habanero has taken the initiative to imbue this concept to their amazing game, the Fa Cai Shen Slot Machine, giving it a more vibrant and appealing idea where you'll be able to expect lots of wealth and riches come in your way. Being the God of Wealth in the Ancient China, you could expect that this Fa Cai Shen game will surely give you a potentially very rewarding gaming experience. Experience speaks louder than words, and you could certainly get down to action right away if you play the Fa Cai Shen Free Play Slot Demo in this page with no registration, no download and no hefty sums of money to risk. Indulge in pure ecstasy and get convinced that this game, loved by Canadian and other wagers, is something that you'll want to include in your favorites list.

Feel the festivities in the setup of the Fa Cai Shen Slot Machine as it takes you at the heart of China, filled with fiery and majestic lanterns, altars and even sophisticated and profound lightened lotus blooms floating on the water. The game is brimming with the essence of China whether it be the background and the reels. Not to mention, the background music itself coagulates the elements in a whole, making it even more appealing than ever. The reels itself have two majestic columns at its sides, with dragon coiling over it. The controls are also intricately made with a gamble feature to get you more chances of winning it big. Not to mention, there's also the Fa Cai Shen Wild Symbol on the game that expands on its whole reel giving you more winning combinations, while a golden crown symbol gets you delectable free spins. Other symbols on the game are the card symbols that pays lower than the symbols related to theme itself like the dragon seal, pierced coin, golden carp and more, which could help you attain up to 1000 coins in jackpot prize.

Explore another festive scene only to be seen in the Glorious China through the Chinatown Slot Machine. It brings a vibrant vibe towards its players just like the Fa Cai Shen Slot Machine through its 5-reel and 50-payline gameplay with a more modest graphics and overall gameplay. Still, though its gameplay is much simpler than what Fa Cai Shen offers, it has the same amount of jackpot at about 1000 credits, making it as appealing as Fa Cai Shen.

Though Habanero has quite a lot of games at its disposal, there are very few sites that uses its platform. However, expect that to grow as even the Club Gold Casino has started using it. You could enjoy the Fa Cai Shen Slot Machine at this site as it offers players with a generous welcoming promotion that will match your dollar for another dollar to a max deposit of up to $2,250. You could also instantly access it through your browser with flash or download it - whatever you prefer. With these characteristics alone, it is enough to see that the site values its players, making it a great place to stay for any wagers.