Eye of RA
Enjoyed playing this game?
Rate it → 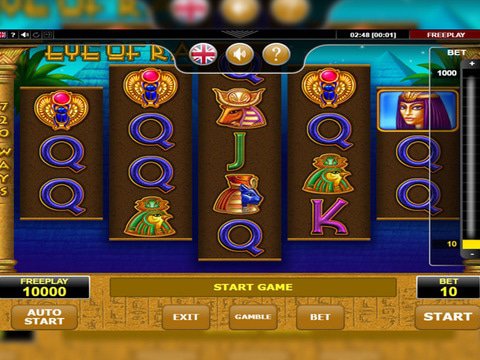 If you line up the games from various developers that fall under the Egyptian-themed category, you'll get a sea of them right in front of you - that is just how cliché the Egyptian World in waging has already become. Still, this is just because the historical beauty of this type of game has always managed to capture the attention and kept the intrigued of players for long spans of time. The Eye of Ra from Amatic Software, is one of the most exemplary in this line of Egyptian-themed games and there's no doubt that from Canada to Asia and everything in between, wagers have become greatly captivated by this game. Who wouldn't want such an invigorating theme, showing an awe-inspiring setup of Egypt and one of its Gods, right? Feel free to spy on what the game really has to offer by playing it yourself. Banish worries from hassle and risks with the no registration and no download Eye of Ra free play slot demo present here.

A Trip to the Ancient Egyptian Domain of Ra

In retrospect, the game's command system, overall feel and audio are somewhat generic, but still complements the game incredibly well. The Eye of Ra Slot machine will bring you to the noteworthy Palaces of Egypt with the night encompassing the sky, the pyramids far off in the distance and the river right below the reels. Looking at the reels itself, it is easy to conclude that the game refuses to become part of the norm as it provides a unique window of 5 reels. This 5 reels and its shape works harmoniously together to provide over 720 ways of winning to players. This kind of probability of grabbing victory is enough for the game to convince anyone that's it's worth playing in its universe. With its unique set of reels, the user could only change the betting amount through the controls and also choose to play the gamble round to a double-or-nothing risk on every winning spin. The card icons may be somewhat insignificant, but other those, there are also scarab beetles, various statues of Gods, Cleopatra and a sarcophagus. The pyramid symbol acts as the bonus of the game, ready to grant free spins that could be retriggered even during the free spins round. There's also the Eye of Ra symbol with the power of a wild symbol to aid you in your expedition.

Another game depicting the valiant aura of Ra, just like how the Eye of Ra Slot machine does it, is the Book of Ra Slot developed by Novomatic. The game will welcome you to the Historic, Egyptian World in an expedition to scour for glorious treasures with prizes that could amount up to 5000 coins. If you think that's small, max out your bet and if you're lucky, you'll be able to bath on the maximum $100,000 jackpot of the game.

Seeing as Egyptian Games like the Eye of Ra Slot Machine isn't something new to the industry, making sure to increase the odds of winning is the most logical step one has to make and you could do that by heeding our suggestion and trying out the game at Mars Casino. The site has it all, from surreal overall operations down to unmatchable free spins bonuses, no deposits bonus and match-up bonus.